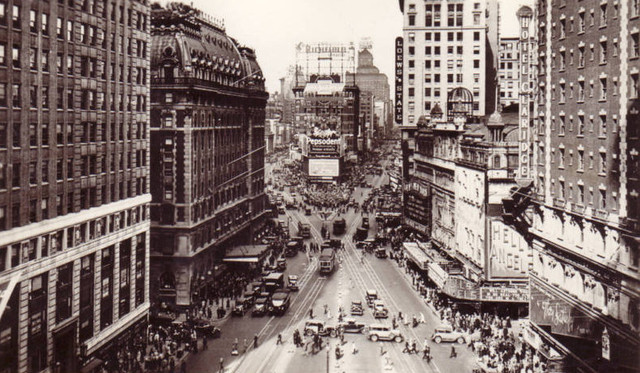 Broadway’s first Criterion Theatre was originally called the Lyric Theatre, opening in 1895 as part of Oscar Hammerstein’s block-wide entertainment complex, the Olympia (see the listing here for Loew’s New York for more details). The Lyric Theatre was decorated in Louis XVI-style and had about 1,700 seats, many in five tiers of boxes that flanked both sides of the stage. In 1898, Hammerstein’s numerous creditors forced him to sell the Olympia at an auction in which the components were sold separately.

Stage producer Charles Frohman took over the Lyric Theatre and re-named it the Criterion Theatre in honor of the famous playhouse in London’s Piccadilly Circus. The ex-Lyric’s seating capacity was substantially reduced to about 900 by removing many of the boxes. In 1914, the Criterion Theatre became one of Broadway’s first “movie palaces” when the Vitagraph Company took over and turned it into a self-named showcase for its major releases. The Vitagraph Theatre opened on February 7th, 1914, with the Vitagraph feature “A Million Dollar Bid” and some Vitagraph short subjects. Music was provided by a Wurlitzer organ capable of sounding like a full orchestra. Although the Vitagraph Theatre proved successful, rival exhibitors were outraged by a producer-distributor operating its own theatre and began to boycott Vitagraph product.

When its lease came up for renewal in 1916, Vitagraph gave in to the pressure and withdrew from the theatre, which was returned to the “legit” fold under its previous name of Criterion Theatre. In 1920, Paramount-Famous Players, which also ran the Rialto Theatre and Rivoli Theatre, took over the Criterion Theatre and made it a reserved-seat showcase for some of its most important releases, including “Beau Geste”, “The Covered Wagon”, and DeMille’s first “Ten Commandments”. With the opening of the flagship Paramount Theatre in Times Square in 1926, the Criterion Theatre started showing films from other distributors as well.

The Criterion Theatre survived the arrival of “talkies” and operated almost to the time of its demolition in 1935, when the entire Olympia complex was razed to make way for new buildings that included a modern cinema of the same name.

Gents, both links work for me. The first just gives me the ad image. The second goes to Flicr.

The Criterion is on the right in this 1933 photo:
http://tinyurl.com/5kke7u

The original interior as the Lyric (1895):
www.photobucket.com/albums/a18/Warrengwhiz/criterionlyric.jpg

The stage as re-built for the Vitagraph Theatre (1914). This permanent setting had a drop curtain in front of it that was raised just before a performance started:
www.photobucket.com/albums/a18/Warrengwhiz/criterionstage.jpg

A fuzzy image of the Vitagraph’s box seats adjoining the stage:
www.photobucket.com/albums/a18/Warrengwhiz/criterionboxes.jpg

The Criterion in 1933, showcasing a German import released by Universal:
www.photobucket.com/albums/a18/Warrengwhiz/criterionsos.jpg

Basically, you want to remove “i18” from the domain name in the links. Looks like Photobucket reorganized their structure at one point.

Well those four links are no good. And Warren deletes pictures that were once in his photobucket from time to time.

Paul Wegenerâ€™s terrifying Expressionist masterpiece, “The Golem: How He Came Into the World,” made itâ€™s US premier at the Criterion (New York Times, June 19, 1921 p. 67). Also featured in that program, the third chapter of Tonyâ€™s Sargâ€™s Almanac; “Wandering Tribes of the Sahara,” a Kineto review and “Scenes of Prague,” a Prizma scenic. At a time when the best feature films typically ran for one or two weeks, “The Golem” enjoyed a three and one-half month stay at the Criterion.

I, Daisy Gonzalez, worked at the Criterion Theatre for almost 10years as it’s manager. We had some of the best movies open there on Fridays, Terminator, which allowed me to meet Arnold. Lethal Weapon, I meet Mel Gibson and Danny Glover, plus Michael Mann. Die Head. I walked Andy Warhol into the theatre. Played Arthur for a year. Meet Roger Moore, had my picture taken with Sugar Ray Leonard and the list goes on.

It was the best 10 years of my life. I worked with a great staff, Mr. Simmons, Ms. Esther and Effie. I loved working on Broadway and watching 42nd street change. Now it’s gone and Broadway is not the same.

Hi Daisy you posted your comment on the Criterion Theatre that closed back in 1935. It was at the same location as the one you worked at.
Here is the right link for your theatre.