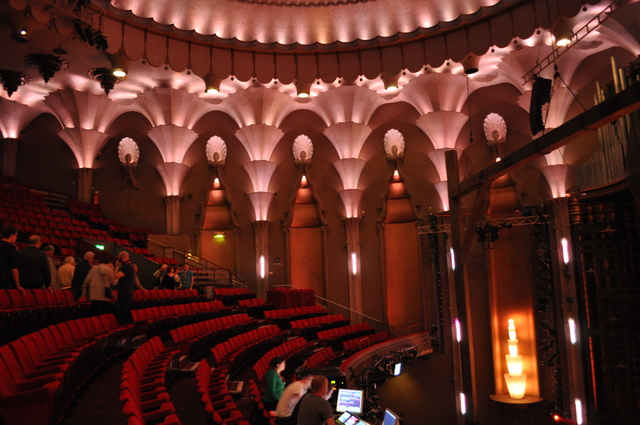 Opened as the New Victoria Theatre on 15th October 1930 with George Arlis in “Old English”, plus a stage show “Hoop-La” and Reginald Foort opened the Compton 3Manual/15Rank theatre organ. It was designed for Provincial Cinematograph Theatres(PCT) by William Edward Trent and Ernest Wamsley Lewis. Built on a rectangular site it has two almost identical facades one to Vauxhall Bridge Road and the other on Wilton Road -the site measured 167 feet by 100 feet.

The two facades are severe in appearance with the main feature being horizontal banding (containing four rows of four rectangular steel framed windows at the stage end) which contrasts sharply by the vertical banding over the dual entrances. On the Wilton Road entrance two bas-relief panels depicting an audience watching a film were the work of Newbury Abbot Trent who was also responsible for some of the interior sculptures.

The theatre is ingeniously planned with the stalls below ground level and the main foyer inserted into the circle void area - the front circle emergency exits are at street level, giving some idea of the amount of excavation that had to be undertaken.

The auditorium was designed as a ‘mermaid’s palace’. With huge flowers which branch up and lights with the appearance of glass stalactites hanging down from the ceiling (long removed). The proscenium was a mass of nine slender silver columns on either side above which were dummy organ pipes, again in silver giving the impression of a waterfall. Elsewhere decorative touches of fish, shells and waves can be found.

The New Victoria Theatre was closed briefly during the war from September 1940 to May 1941 but sustained no serious damage. By this time it was operated the by Gaumont British Theatres chain.

Eventually becoming part of the Rank Organisation, film entertainment ended here on 1st November 1975 with the double bill programme:Peter Cushing in “Legend of the Werewolf” and Adrienne Corri in “Vampire Circus”.

Since when it has become a live entertainment venue - firstly mainly concerts starring the likes of, Fats Domino, Shirley Bassey, Dean Martin, and Liza Minnelli, then large scale West End musicals - a revival of “The Sound of Music”, and to-date, the longest run in the theatre was “Starlight Express” which opened here in 1984 and finally closed at the beginning of 2002. After this long run, the theatre closed for many months to allow for a major refurbishment. It became the home of the Bollywood spectacular “Bombay Dreams” followed by “Saturday Night Fever” and “Wicked” which opened 27th September 2006. The theatre currently seats 1,934. On Sunday 4th November 2018 the Apollo Victoria screened its first film in 43 years when “Bridget Jones Diary” was shown accompanied by a 60 piece orchestra.

The Apollo Victoria is one of the UK’s best preserved 1930’s ‘super cinemas’ and its unique design and excellent condition fully justify its Grade II* Listed building status which was bestowed by English Heritage in 1972.

In 1982 met the late Australian soprano June Bronhill in her dressing room after a performance of ‘The Sound Of Music’ (The Petula Clark production). A wonderful experience. Recently visited this fabulous building to see ‘Wicked’. Always great to sit in this wonderful atmospheric auditorium.

Is this the theatre that was on the news last night about the ceiling falling onto patrons during a performance?

markp: No, this is the Apollo Victoria Theatre, located in the Victoria area of central London.

The Apollo Theatre, on Shaftesbury Avenue in London’s West End district was the theatre in the news last night which had a large section of its main auditorium ceiling collapse into the orchestra level, which also caused damage to the front of the dress circle. Luckily no one was killed although there were seven admitted to hospital with serious (though not life threatening injuries) and 79 others were injured. The Apollo Theatre, was built & opened in 1901 and has seating for 771 in orchestra, dress circle, balcony and upper circle levels. The upper circle is the steepest in London’s West End. It is a Grade II Listed building has always been a playhouse/live theatre, so is not eligible for inclusion on Cinema Treasures.

The accident happened around 40 minutes into a performance of the National Theatre’s hit production of “The Curious Incident of the Dog in the Night-time” which had been playing to sell out capacity audiences since opening in March 2013. The cause of the ceiling fall is being investigated, and one possible cause is that London suffered a violent thunderstorm with 15 lightning strikes in one hour and 8mm of rain and hailstones fell! All performances at the theatre have been cancelled until at least 4th January, 2014.

I Managed the New Victoria together with the Metropole across the road in Victoria Street 71 to early 74 including in addition to the regular one nighters and dance seasons the last London Run of the Black and White Minstrels for which the Theatre was redecorated, I hesitate to say lavishly, in a colour scheme similar to that on opening. I also introduced in this time the closure of the FOH doors except for exit only on the Vauxhall Bridge Road side of the building having got fed up with the public using the foyer as a short cut to and from the station particularly at afternoon rush hour. It is nice to see on a recent visit that this is now a firmly established practice. The New Victoria is a great theatre, wonderful auditorium and not known to the public, spacious back stage production and dressing space. There is a complete set of properly lite architects photographs taken at the time of the theatre opening held by and available for view, at the National Photo Archive in Saville Row.

Does anyone remember the cult George Sanders film Psychomania playing there in a double bill with The Baby in March – April 1973? Apparently it was where it opened in the UK, and I’m trying to find out.

Moonzerotwo: “Psychomania” & “The Baby” had an Odeon/Rank release on the first week of May 1973 (selected theatres).

Ken Roe: many thanks! I’m co-writing a book on Psychomania and trying to track its UK and US release. Not difficult for London (it seemed to start at the New Victoria on about 23 March 1973, but trickier for the rest of the country.

Ken Roe tells me it was just announced the film “Bridget Jones’s Diary” will screen at the Apollo Victoria Theatre with Live Orchestra on Sunday 4th November.  The Stage show “Wicked” plays Monday – Saturdays. 1st film at the theatre which hasn’t show a film for 43 years.