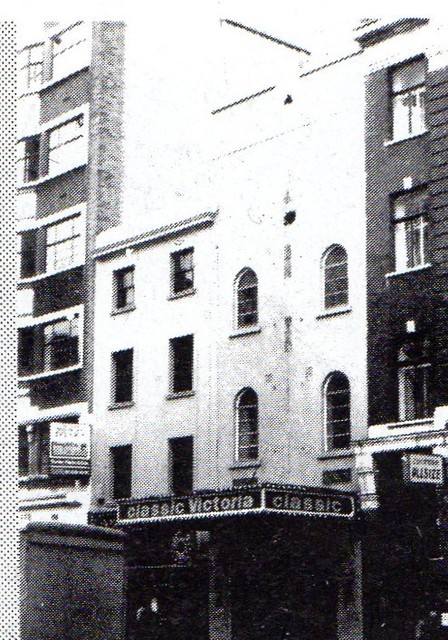 Located in the central London district of Victoria. Often confused with the Victoria News Theatre on Victoria Railway Station, the Cameo News Theatre was unconnected with the station venue, apart from both cinemas being designed by the same architect.

It had a very narrow frontage from which a long narrow foyer led down to the free standing auditorium. The theater held 604 and had good sightlines on a well raked single floor. The upper walls and ceiling were finished in combed plaster, with horizontal bands on the lower walls.

Either side of the screen was a a decorative grille with concealed lighting and down the centre of the ceiling was a trough also with hidden lighting.

By the late-1940’s the cinema had become a repertory house with short programs of ‘art’ films, which proved very popular, and it was renamed Cameo Victoria, part of the Clavering & Rose chain of Cameo Cinemas.

It was taken over by the Classic Cinemas Ltd. chain in 1967 and its fortunes began to decline but it was not until September 21, 1980 that it closed for good.

After being used for retail purposes for a while, the auditorium was demolished along with the auditorium of the nearby Metropole Cinema to be replaced by an office block. The foyer remained in use as a Bella Italia Restaurant for many years. In March 2013 the entire block, including the foyer of the former Metropole Cinema were demolished, to build a new entrance to Victoria Underground Station.

The architect of the Cameo, Victoria was Alister G. MacDonald. Although the auditorium has been demolished, the frontage and long narrow lobby are still in use today as a pasta restaurant. The facade and foyer of the nearby Metropole Cinema is also a restaurant.

An October 2005 photograph of the exterior of the former Cameo Victoria with the fomer foyer in use as a Bella Italia Restaurant:
View link