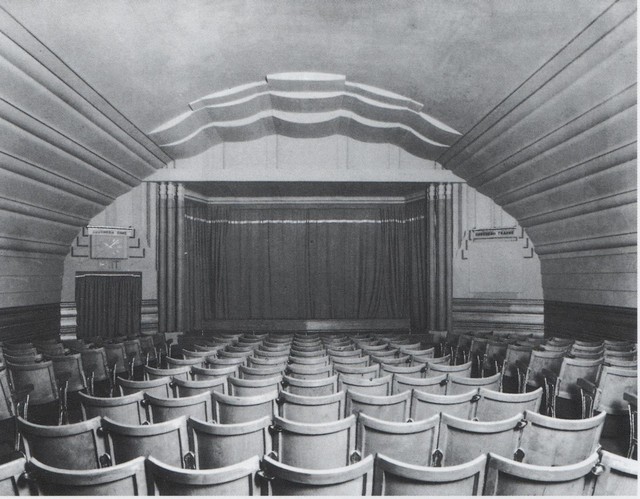 Located adjacent to Platform 19 on the Buckingham Palace Road side of Victoria Railway Station in the centre of London. The Victoria Station News Theatre was opened on 12th September 1933. A quite amazing little cinema positioned over the concourse of the station with just a small but highly stylized entrance paybox and staircase at ground floor level leading to the 1st floor auditorium.

This contained a single flat floor with seating divided into three blocks - two outer with 4 seats per row and a central block of 7 seats per row.

The auditorium was barrel shaped with an attractive proscenium and a large clock on the left hand side. The whole was specially insulated against noise and vibration from the railway station outside.

It never moved on to presenting feature films - one major drawback was that it had no toilets of its own (patrons had to come down the stairs, exit the cinema and walk a few yards to the public toilets on the railway station concourse).

Operated by the Classic Cinemas chain, the Victoria Station News Theatre was one of several small newsreel theatres in London and in later years showed continuous 1-hour programmes of short subjects and cartoons. It was quietly closed on 27th August 1981 with the Walt Disney short cartoon “The Hound That Thought He Was a Racoon” and an edition of Movietone News featuring the 1937 Coronation. It was later demolished.

hi.there this is ray aguilar,i was there on the closing night,even lent the chief dave oddy a reel of old nitrate newsreel to show,happy memories,anyone remember th waterloo station news theatre.ray

Apparently this was the last cartoon cinema left in the UK when it closed with ‘The Hound that Thought He was a Raccoon’ on August 27th, 1981. I’d been told by my father about them but I never knew how long they lasted.

I’m sad to pass on the news that David Oddy passed away on Jan 12, 2015 in Oxford at age 74. His cinema career spanned almost five decades, starting in the late 1950’s. He was chief projectionist at several major cinemas in the West End of London, including the Victoria Station Cartoon Cinema. The BBC interviewed David on the sad day when it closed in 1981. He also worked at several other greater London cinemas, including an art house in Richmond.

David was well known and respected among his fellow projectionists. In his time most of the West End cinema projectionists knew one another as they frequented the same pubs and it was common practice to move employment from cinema to cinema. David was one of the most colorful of the lot with his quick mind, sense of humor, impeccable dress, and his love of gadgets and anything mechanical. I’m sure he and his buddy Jim Carter will both be remembered fondly as long as any of that group is still around.

David spent the last decade of his career in the AV department of the Imperial War Museum. There he had the opportunity to handle and show rare archival footage and to meet many dignitaries at exclusive screenings. He retired to Oxfordshire upon retirement.

In the days before digital filming,the projection booth was quite an engineering project. Dave was a self taught engineer who built several booths from the ground up. Long before digital controllers he devised mechanical contraptions to automatically open and close the curtains in front of the screen, to raise and lower the house music volume and to dim and raise the house lights.

The skills that David took pride in and that brought a fabulous entertainment experience to so many people in the pre-digital era are now almost entirely lost. He was an exceptionally inquisitive creative person and a loyal friend. He’ll be missed.

Was this the little News and Cartoon cinema with an entrance just outside Victoria Station? If so my mother used to take me when I was a baby along with her friend Molly and they used as a drinking vessel the head my little rubber doll. I loved the cartoons, Charlie Chaplin shorts and all the newsreels of WW2 which had ended a couple of years earlier.

very sad to hear the news about dave oddy,he came to my house in the projectors80s after the news theater closed at victoria station,i bought the kalee projectors and had them in my home cinema for some time,dont know what i did with that old nitrate movietone news,shown on the last night at victoria,it was quite a job getting those projectors down from the roof! ray

Lunaluna please get in contact .. I’m Jim carters nephew and I knew David odd very well .. he was a great guy and a brilliant projectionist he got me into working at riverside studios Hammersmith years ago .. he lived near Oxford with a little model railway around his tree outside ..I’ve been wondering what happened to David and I knew he came from Putney as his mum lived there .. thanks

I stumbled across this great website while reminiscing. I went on occasion to the Cartoon Cinema in the mid to late 70s with a troop of kids from the Peabody Estate on Vauxhall Bridge Road. A real treat. Cartoons and old black and white movies were shown on a loop, and we would watch the, through at least twice around. Vividly recall Rocket Man, Tarzan, Flash Gordon, and Superman, and being fascinated by what we would now call terrible ‘production values’. Cheetah the chimp was an actor in a very bad suit. If I remember correctly, Superman had the physique of a bus conductor and smoked fags. Us kids thought the films ridiculous – but were mesmerised none the less. We LOVED the cartoons.

“Did they only show cartoons there?”

I remember working there as Assistant Manager in the late 1960s. The hours were long and I’ve lost count of the amount of times I used to run up and down all those stairs from the cash desk to the auditorium! Classic Cinemas, in their wisdom, decided we should screen a late night full length feature film on Saturday nights. This attracted a motley crew of patrons and occasionally a fight would break out. What a nightmare.

I worked here for about 2 years as assistant manager in the early 1970s. Mrs Evans was the manager and a great boss and the 2 long time and elderly doormen/ushers were Walter and John. John was Irish and had a striking resemblance to Stan Laurel! Bridget, also Irish was the cashier in the kiosk/box-office at the ground floor entrance that opened onto Buckingham Palace Road where the Queen’s Guard would march past every day for the changing of the Guard at the Palace. There were no public toilets in the cinema but the staff had one toilet off a store room accessed half way up the stairs. We had another store room at the rear side of platform 16 below. Access to the projection box was via a spiral staircase accessed from the tiny office off the cinema foyer. There was another very small kiosk on the 1st floor just near the entrance to the auditorium and a poker machine in the corner which only took 10p coins. We opened at 10am with a continuous programme of cartoons, travelogues, “Look At Life” mini documentaries, 1950s Pete Smith or Laurel & Hardy comedy short and a 1930s serial. The last session was at 9pm finishing at 10pm with national anthem God Save The Queen. Saturday and Sunday afternoons were the busiest times. People would come every week just to see the next episode of the Flash Gordon or Tarzan serials. One of my jobs at the end of the evening was to walk along each aisle in the auditorium and check there were no burning cigarette butts left in the ashtrays or on the floor.