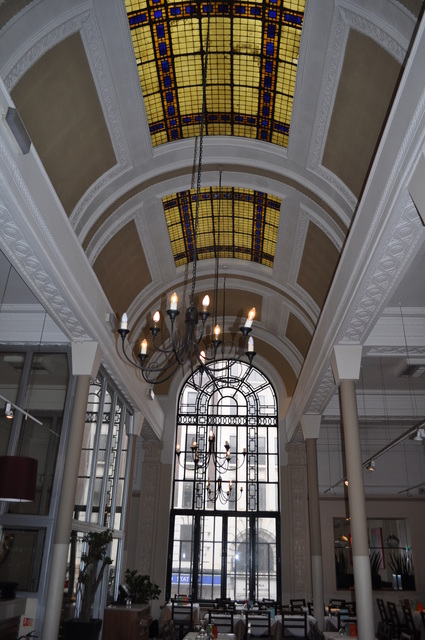 The Metropole Kinema was the first large cinema in the Victoria district of central London and opened on 27th December 1929 with Stanley Holloway in “The Co-Optimists” and Jameson Thomas in “Hate Ship”, plus Jack Hylton’s band on stage.

Built for the brothers Syd Hyams & Phil Hyams, it was designed by noted cinema architect George Coles, and had a marble and onyx façade, with the central window glazed in blue and amber glass. This window allowed light into the café/restaurant which was located above the entrance. The ceiling of the foyer also had a glazed section containing coloured glass. The auditorium ran parallel to Victoria Street behind other buildings, with one side wall along Arlington Road which provided exits. Decoration was in a Spanish Renaissance style with a very ornate proscenium (37 feet wide) and equally ornate dummy boxes, one either side of the stage. Seating was provided for around 2,000 in stalls and circle levels. The stage was 25 feet deep and there were six dressing rooms. The Metropole Kinema was initially equipped with a 3Manual Standaart organ, opened by organist Archie Parkhouse. This was replaced in July 1935 by a Wurlitzer 3Manual/11Ranks organ which had been installed in 1928 in the Fulton Theatre, Cleveland, Ohio. Initially the Metropole Kinema was a 1st run neighbourhood (off West End) cinema. In 1943, the Hyams brothers sold out to Oscar Deutsch’s Odeon Theatres Ltd. chain, although the Metropole Cinema was never renamed Odeon. It played 1st run Odeon circuit releases, prior to their North London and subsequent South London releases. The auditorium (and its Wurlitzer organ) were featured in a scene in the classic 1945 David Lean film “Brief Encounter” starring Celia Johnson & Trevor Howard.

Late in 1959 Todd-AO was installed here on a new screen in front of the proscenium, concealing the boxes, and 500 seats were lost, giving a new seating capacity of 1,394. “Oklahoma” was the first film to be presented here in that process, opening on 26th December 1959 and was also the start of ‘Roadshow’ presentations here. It was followed on 26th March 1960 with Frank Sinatra in “Can Can”. The Wurlitzer organ was removed in 1961. “Can Can” was followed by a long run of Charlton Heston in “El Cid”, then on 8th December 1960 a European Premiere run of “Spartacus” starring Kirk Douglas. Following an eight-weeks run at the Odeon Leicester Square, in February 1963 Peter O'Toole in “Lawrence of Arabia” began a 98 weeks run, presented in 70mm. On 5th April 1967 the Metropole Cinema hosted a Royal Premiere of “The Sand Pebbles” starring Steve McQueen.

Eventually ‘Roadshow’ product dried up and the Metropole Cinema began playing 1st run, but inferior films from independent distributers, often concurrent with the Astoria Cinema, Charing Cross Road. The Metropole Cinema was closed by the Rank Organisation on 11th June 1977 with Bette Davis in “Burnt Offerings”.

It was converted into the Metropole Laser Theatre hosting a show named “Lovelight” which operated from 21st June 1977 until 26th September 1977. It then stood unused for over a year before it was leased by Virgin Records and re-opened as a concert hall called ‘The Venue’ which was operated from 1st November 1978 to August 1984.

After this the auditorium was demolished (along with the auditorium of the (nearby/almost adjacent former Cameo/Classic Victoria). The elaborate foyer of the Metropole Cinema was restored and opened as a restaurant which after several operators it was last operated as a pizzaria named ASK. It was announced in September 2010, that the block which included the remaining sections of the Metropole Cinema, and its neighbour the Cameo Victoria Cinema would be demolished to allow an extension to the Victoria Underground Station, providing a new entrance/exit on the north side of Victoria Street.

The entire block was demolished in March 2013.

Ken Ian Oklahoma was the first Todd Ao at the Metropole it opened on Boxing Day 1959. Can-Can opened march 26th 1960.

Has anyone a photo of the 70mm screen from its use as a roadshow cinema?

the leaded glass ceiling from the lobby/restaurant was rescued from the demolition and is now installed in the Bonneville Pub, Lower Clapton Rd, Hackney

Does anyone remember if the film Buckskin Lady starring Patricia Madina was shown at the Metropole, Victoria Street, London in 1957?

By far the longest run at the Metropole during the roadshow era was Lawrence of Arabia, which transferred in from the Odeon Leicester Square after an eight week run there and played at the Metropole for a further 98 weeks (Feb 1963-Dec 1964). During this time it was the only place to see this film, which did not go on general release until April 1965.

I saw it there but cant remember how big the screen was in comparison to the Odeon Leicester Sq. Has anyone a phot of it or the interior with 70mm screen. How did it compare with The Astoria or Dominion for example?

I suggest The Venue opening date was not December, as in your text, but Weds 1 Nov 1978 from my own personal diary note, having attended the opening gig by Graham Parker and the Rumour.

Would be nice to see shots of the box. Philips DP 70 dual gauge projectors were installed to screen the road shows. I wonder what was there before? Possibly Kalee 21 projectors. If only I had gone around photographing some of the many long lost London cinemas when I was there in the 70s and 80s.

I agree There seems to be no one anywhere who has any photos of the interior of this huge cinema from its heyday in the 60s! loved to have seen a picture of its 70mm screen etc

Back then film & developing costs were high. Now I wish I had done more, a lot more, but I had no concept of the scale of the losses that would materialise – particularly in the West End and major cities.