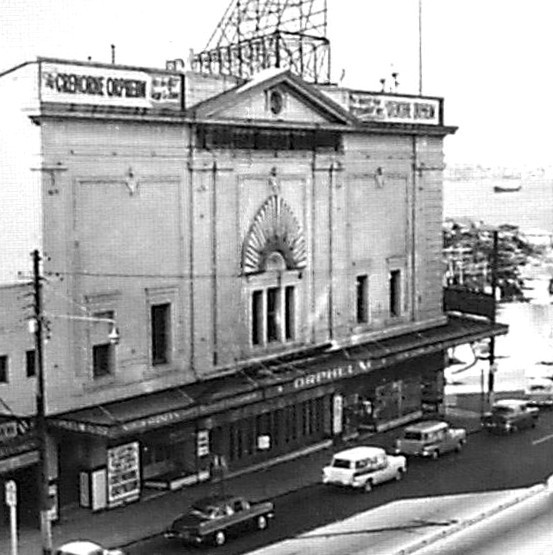 Located in the North Sydney district of Sydney (just across the famous Sydney Harbour Bridge) on Pacific Highway (formerly Junction Road) and Alfred Street. The North Sydney Orpheum Theatre opened on 23rd December, 1913 with 1,200 seats and was built by and managed by the Virgona family. Rebuilt at the end of 1923 with a seating capacity of 1,750, it re-opened on 23rd January, 1924 with “The Purple Highway” and Bebe Daniels in “Game Chicken”.

The cinema was again rebuilt in 1927, to the plans of architect C. Reynolds Winter in a Neo-Classical style. It had opened by August 1927, with over 900 seats in the stalls area alone. It was remodeled in an Art Deco style in 1937 and the stage was enlarged.

The North Sydney Orpheum Theatre was closed on 19th March 1962 with a screening of Clark Gable in “Gone With the Wind”. It had been purchased by the Main Roads Department to make way for the new Warringah Expressway, and was demolished later in 1962.