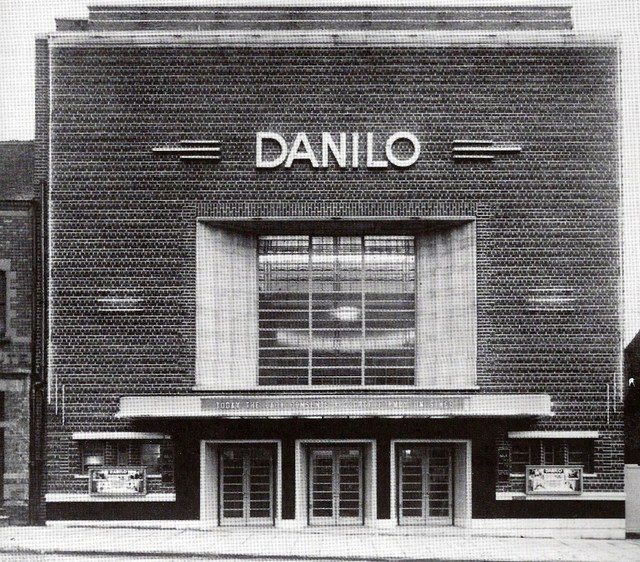 The Danilo Cinema, Brierly Hill in the West Midlands, was the first of a chain of Danilo Cinemas to be built and opened by Mortimer Dent.

The Danilo Cinema was opened on 21st December 1936 with Ann Harding in “The Lady Consents”. It was opened by popular film star George Formby, who was appearing on stage at a theatre in Birmingham that week. It was designed in a splendid Art Deco style by Ernest S. Roberts of the architectural firm Satchwell & Roberts. The mass of brick on the facade was relieved by a large central window, which allowed light into the circle foyer. Above the window was the name ‘DANILO’ in large letters which were illuminated at night with neon.

A major historic moment in the history of the Danilo Cinema was on the evening of 25th September 1938, when Paul Robson appeared ‘in person’ to sing in concert with the Brierley Hill Choral Society.

In 1946, Mortimer Dent sold his chain of Danilo Cinemas to the Southan Morris chain of S.M. Super Cinemas. In 1955, they were sold to the Newcastle upon Tyne based Essoldo Cinemas chain, but this particular Danilo Cinema retained its name until closing on 22nd February 1969 with Dustin Hoffman in “The Graduate”.

It was converted into a Mecca Bingo Club, then later a Walker’s Bingo Club. In 2000, it was converted into the Eclipse nightclub, which closed in June 2002. On 20th December 2002, it re-opened as ‘The Club’, and since then has operated as a nightclub under several names The Deep, Oxygen and from 9th July 2011 as Pulse Nightclub.

This was a fine large art-deco cinema by Earnest Roberts. I remember it well and have added some more photos.