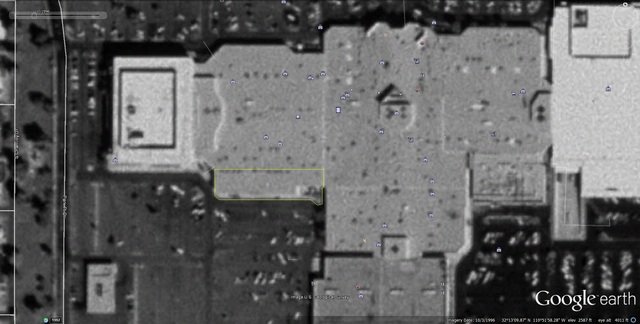 I don’t see any evidence “Jaws” played here on two screens at any point during the first couple of months of its release. What’s your source that it did, dallasmovietheaters?

I’m still curious about dallasmovietheaters' source for the “Jaws” playing on two screens claim. The newspaper advertising during the film’s second week, contrary to his claim, indicated four different movies were playing.

June 27th, 1975 Only 3 movies were running at this cinema. The same print of Jaws were used in two screens.

The frequency of showtimes in the grand opening ad would suggest Benji was actually on two screens.

rivest266 (and dallasmovietheaters)…. How did you determine “Jaws” was playing on two screens at the Park Mall 4-plex during the week of June 27-July 3 (1975)? I’ve re-researched the matter since I realize I misspoke when I stated earlier four movies were there that week. Anyway, my point stays the same that I don’t see any evidence that “Jaws” was on two screens then. For the week being discussed I found the newspaper advertisements indicated “The Wind and the Lion” was on two screens and “Jaws” and “Benji” were on one screen each.

Scott… “Benji” had a running time of only 80-something minutes, so the published showtimes in the ad you mentioned seem plausible for a one-screen booking. (It’s not posted here, but in checking the archived issues of the Tucson newspaper for the time frame in question one will find Mann’s display ad for the Park Mall with “The Wind and the Lion” taking up two slots in the layout. And in the text-based theater listings it has “The Wind and the Lion” listed on two screens. So, again, I’m curious how others have concluded it was “Jaws” on two screens.)

dallasmovietheaters,StanMalone,rivest266,Scott Neff,Coate…Has no one noticed that the grand opening ad shows 4 screens and 3 pictures with Benji showing 7 times, Jaws 6 but Wind and the Lion only 3 times and not before 705? That means a second screen is unaccounted for an additional 7 hours, at least on opening day.

Looking at the opening day schedule, it strikes me that one of the four auditoriums simply might not have been ready for use yet. Back in single-screen days if there was a construction or equipment-related delay, the theater’s opening would have to be postponed, but with this quad the grand opening could have been done on schedule with three screens while the workers finished up whatever had to be done in the fourth auditorium.

Everyone, I have enjoyed this back and forth on the showtimes and lineups as we try to puzzle out the way things were done in those good old days. That ad is hard to read but to me it says:

All of these showtimes would fit into a single screen schedule although I am glad I was not the manager trying to pack those Jaws sellouts in with only 15 minutes intermission.

As a former manager there are several things about this that interest me. First, to Joe’s point, I have been involved in two openings where one theater did not open on grand opening day. Once was because it was not ready and like here they decided to advertise only night shows to give them the rest of the day. It still was not ready but they opened anyway with only half the seats in. In the other case the movie that theater was set to open with did not start until the next week. Both of these explanations could be the case here.

Or, they could have left the fourth theater unbooked and interlocked Jaws on two screens which would account for there not being two sets of show times. They might also have interlocked Benji in the afternoon and run Wind And The Lion only at night. I think that unlikely since at least in my part of the country Benji opened in the summer of ‘74 so it might have just been something for the kids.

Of course Michael has seen the ad in the paper that has Wind And The Lion on two screens and I have never known him to be wrong on something like this. If all four theaters were ready, and knowing the way business was done in those days, if I had to bet I would say that Jaws ran interlocked in two houses, Benji in one, and Wind And The Lion in one, maybe even giving up its afternoon slots for Jaws to be triple locked although I doubt that.

Michael, does your research show this to be an exclusive Jaws engagement for Tucson? If not and they were only contracted for one house maybe they were trying to boost their gross by playing it in two and trying to fake everyone out by falsifying the ad. In a small city like this I am sure someone would have noticed but I have seen that done many times in those days.

Perhaps the most simple explanation is the correct one. Either only three screens were ready and the third on not until that night or the fourth one was waiting for its opening attraction at a later date.

I found an article dated 6/19/1975 from the Tucson Daily Citizen that explains “The projectors will start rolling after noon with "The Wind and the Lion” (PG) being shown in theaters 1 and 2, “Jaws” in 3 and the return of “Benji” in 4.