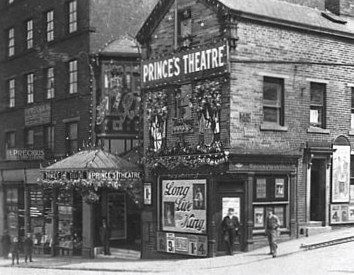 Located on the now vanished Victoria Square in the city centre, just across from the still existing Alhambra Theatre. The Prince’s Theatre was opened in 1876 and was designed by the architectural firm Jackson & Longley. It was built above the Star Music Hall (later People’s Palace/Palace Theatre, which had opened in 1875.

In 1900, the Prince’s Theatre was re-designed by the original architectural firm, and the theatre began screening films as part of the programme. it was still screening films in July 1909, but soon went back to live theatre use only, as new purpose built cinemas arrived.

The Prince’s Theatre was closed on 27th May 1961 (the Palace Theatre had closed in 1938, and was never reopened). The buildings remained empty for several years, then both theatres were demolished in 1964. A garden was created on the site, which today is in front of the National Media Museum.

The main entrance on Little Horton Lane(shown above) was for the more expensive seats and involved a long walk down a corridor behind the terrace of houses on the right of the photo. The auditorium and stage building was on Manchester Road, exactly opposite the old Odeon. For cheaper seats at the Prince’s, patrons walked the pavement in front of the terrace houses to the auditorium. The Prince’s was, latterly, a repertory theatre with Harry Hanson’s Court Players; Pat Phoenix was a ‘Player’ before going on to be Elsie Tanner in Coronation Street.

There is additional historical information about this theatre on this webpage.

As noted, Prince’s Theatre was located on top of the Star Music Hall/Palace Theatre, making it a part of the possibly first stacked set of theatres in the United Kingdom. The design resembles in some respects Loew’s Mall Theaters opened in 1914 in Cleveland, Ohio USA.