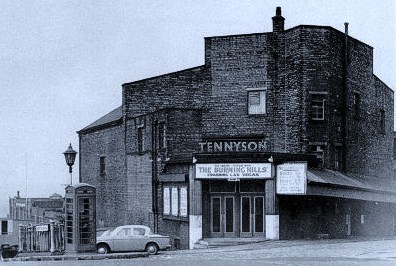 Located on a triangular site on the western side of Otley Road at North Wing. The Tennyson Picture House got its name from the now long gone Tennyson Place opposite. It was opened on 15th October 1923 with “Rudolph Valentino in "Moran of the Mary Letty”.

Seating was provided for 885 in the stalls and 277 in the circle. The projection box was at the rear of the stalls, beneath the circle.

The Tennyson Cinema was closed on 1st July 1961 with Elvis Presley in “GI Blues”. It was converted into an independent bingo club. The building was later demolished with the widening of Otley Road.

There is additional history of this theatre on this webpage.