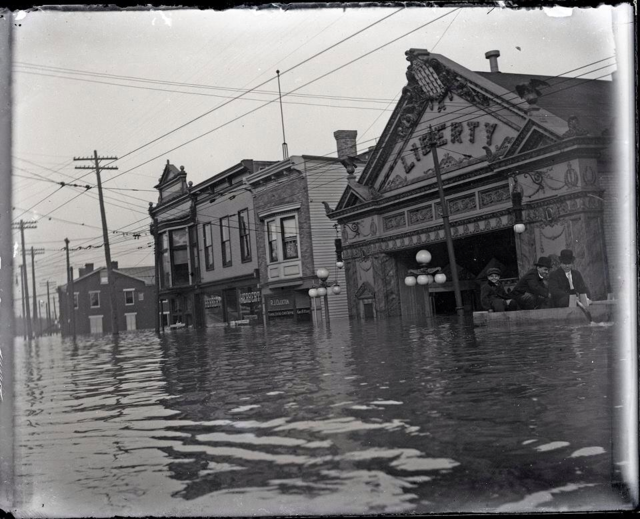 The Liberty Theatre was opened in 1909, and operated as a movie and part time vaudeville house for two decades. The theater was closed in 1929, and part of the building was converted into a restaurant, and restaurants have occupied the space most of the time since then.

The building is owned by the Deaf Club of Greater Cincinnati, and the club’s quarters occupy the rear portion of the former theater, with various rooms on the ground floor and an large hall on the upper floor, which looks as though it might still have the Liberty Theatre’s original auditorium ceiling.

The facade of the building retains its original triangular pediment and decorative trim, and is a pastiche of Colonial Revival styles with a few bits of Art Nouveau added for good measure. The overall effect, like that of many early movie theaters, is suggestive of an attraction along an early twentieth century amusement park midway. The front was originally studded with electric lights in red, white, and blue, adding to the carnival effect.

The Liberty Theatre building was added to the National Register of Historic Places in 1982.

The web site of the Liberty Theatre’s current owner, the Greater Cincinnati Deaf Club, features this photo gallery which includes a few shots of events taking place in the upstairs hall. It appears that the original auditorium was divided into two floors, with offices, rest rooms, smaller meeting rooms and such on the ground floor and a large hall occupying the upper half.

The ceiling looks like it might be pressed tin, and is probably the Liberty’s original ceiling. The stage in the hall appears to have been built above the original stage, and its proscenium is probably part of the original, though it was most likely raised above its original level, which would not have come so close to the theater’s ceiling.

Thank you Joe Vogel for including the Deaf Club photo gallery at the Former liberty theater in Cincinnati! I’ve always wanted to see what was left of the theater interior at the Liberty. It must have been a tremendous cleanup job for the theater after the 1937 flood as the water level on the exterior was up to 2 feet of the pair of eagles on the structures facade.

During the 1937 flood water reached to within 2 feet of the eagles perched upon the facade of this theater. What a job it must have been to restore Liberty after so much water and muck. Fortunately the fire which erupted from burst gasoline tanks further south toward Cincinnati, did not float there flaming contents to this neighborhood.

Check out the pic I uploaded of the theater during 1937 Flood.