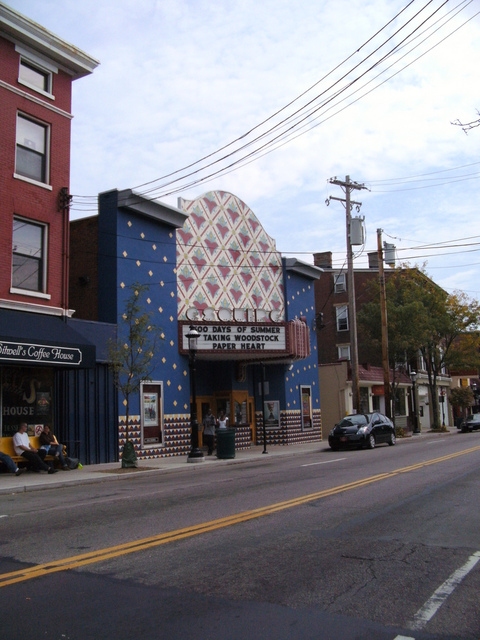 The Clifton Opera House opened in Clifton, a district of Cincinnati, Ohio in 1911 and became the Clifton Theatre screening movies by 1915. On December 24, 1939 it was renamed Esquire Theatre. It became an art house in the 1960’s. Closing in 1983 due to competition from new multiplexes, it was scheduled to become a Wendy’s fast-food restaurant in 1984.

However, the planned conversion was blocked over a six year period by neighborhood advocates who eventually helped reopen the theater on April 20, 1990 as a 400-seat triplex. Around 1999, the theater was remodeled again and now houses six auditoriums.

hank.sykes: The directory, being an annual publication, probably went to press before the name was changed (in fact, most city directories were published late in the year previous to that which they were dated.) The magazine was a monthly, and would have had the latest information. That would give a probable date of early 1915 for the theater’s first name change.

Here’s a link to The Cincinnatian, Volume 1, issue 32. The list of theaters is search result 5 (Google’s page number 41, in case Google Books doesn’t bring the page up automatically.) Some of these theaters might not yet be listed at Cinema Treasures, and others are probably listed under later names. I’m not familiar enough with the Cincinnati portion of the database to figure out which might be which. Maybe you can recognize some of them.

Hello Joe, Many thanks for The Cincinnatian volume , the only one I could find at our main library was for 1927,it’s a real plus to have this link.

In case you haven’t seen it, follow the “About this book” link at the upper left of the Cincinnatian page, then scroll down to the “Other Editions” section. Google Books provides full views of two more volumes of the Cincinnatian, from 1916 and 1917.

Also, you might be interested in the several editions of Ohio Architect, Engineer and Builder available at Google Books.

Hi all, I share your interest in cinema treasures and just stumbled on this site. I do the PR for the Esquire & would LOVE to find some vintage photos of the theatre. Any idea where I can find some? Went to the Museum Center Historical Society but they didn’t have anything. Thanks, Kathy

The Esquire is celebrating its 101st birthday. View article

What a cool-looking movie theatre!

I have uploaded photos of a plaque set in the sidewalk at the theatre’s entrance commemorating the Esquire’s 1987 victory in court over the fast food chain.

I visited the theater in August on my “Indiana-Ohio Trip 2016”.