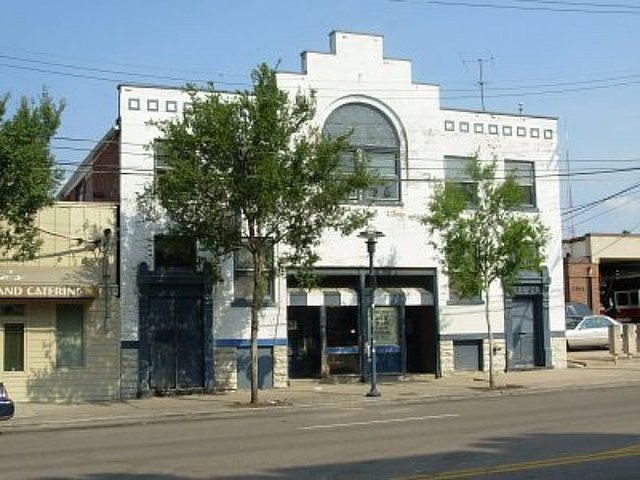 Built in 1902 initially as a funeral home and a morgue, with a large center door to accomodate horse and livery vehicles. In the mid-1970’s, this building was converted into a three-screen theatre with each small auditorium given its own name, i.e. the Bijou, the Roxy, and the Ritz. I remember hearing their radio advertisements on the local album rock stations - they catered to the college and “head” crowd playing art and cult films like Bergman’s “The Serpent’s Egg”, though a woman on a Cincinnati building survey blog claims she also saw “Star Wars” there. They may well have even had initial screenings of “The Rocky Horror Picture Show” before it moved to its longtime home at the Skywalk Cinemas downtown.

By the late-1970’s, they gave up movie programming and gutted the space for a nightclub; the various names it operated under were Top Cats' and Shipley’s.

This building became known as the 86 Club, an alcohol-free venue that caterd to the 16 and over crowd with mostly punk rock and metal shows, and garnered kudos for their outreach to the local community and at-risk youth. The name originated from its previous incarnation as 86 Ministries, so named for helping people who feel they’ve been “86'ed” from family or society.

Talked to my old friend Russ, and here’s what he remembered:

“I remember seeing one movie there – A Piece of the Action, one of the three pseudo-blaxploitation pictures Bill Cosby and Sidney Poitier did together in the ‘70s.

As I recall, the building, itself, was an attempt at a boutique mini mall, like what the Ludlow Garage tried being. The “theatres” were on the lower level, I believe. I put that in quotes because it was really just a three-screen theatre, with each screening room bearing a different name. I want to say the idea was to give each its own identity, in terms of what was shown, but that could be wrong. I think the top level might have been a club – it certainly became one. There was a record store – I still remember they had one of those stand-up displays, for Queen’s News of the World.

It was art house/revival house/second run, with the second run stuff intended to pay for the other stuff."

Blue auditorium seating from The Cox Th. on 7th St. were sited or seated here after the Cox was demolished. Blue was Mrs. Cox’s favorite color.

I remember watching a film there, going out to the lobby because a splice had caused the film to be out of frame, and there was the projectionist playing the video game.

I went to these theatres one time to see “Nashville”. The whole experience reminded me of watching a movie in someone’s basement. The theatres were very tunnelish and the screens went from wall to wall. I am glad I saw the film, but wish I had seen it in a better environment.

Looks like the church has left, and it’s been reconfigured into a nightclub again, and they’re even calling it Top Cats as it was known back in the ‘80s: