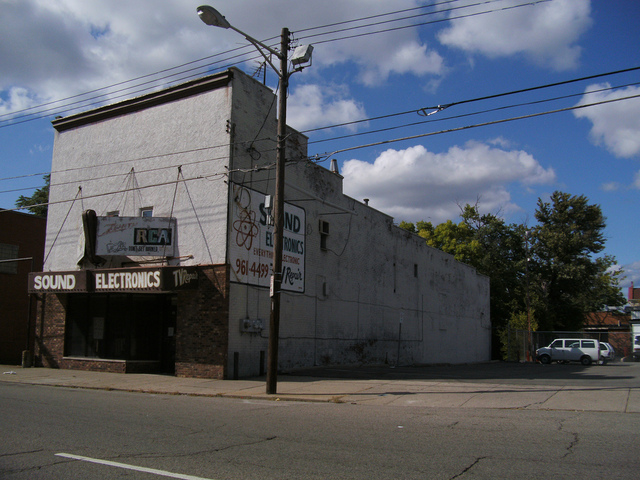 One of a few theatres in the formerly vibrant Peebles Corner business district in the Walnut Hills neighborhood of Cincinnati. Opened as the Eden Theatre in 1939.

Later known as the Guild Theatre, it was remodelled around 1948 by architectural firm F & Y Building Service. It was long known as an art theatre, and is most famous for being the venue where Russ Meyer’s “Vixen” had opened before being shut down by the city vice squad, leading to a long and very expensive lawsuit filed by Meyer against the city.

When last spotted, the building was still standing and serving as a TV repair shop. An intriguing, abstract painting (I suppose meant to suppose artistic film expression) still adorns its visible side wall, albeit in extremely degraded condition.

I think there was an attempt to reopen it as the Eden in the early/mid-70s, some kind of joint attempt between the Alpha Fine Arts and one of the local theatre bookers/owners. It didn’t last long.

Is this the theater? It would be around the 700 block of E. McMillan street.
http://tinyurl.com/lkmq2m

CINCINNATI (AP)-Obscenity charges against a movie operator for showing the film “Vixen” were returned to Hamilton county common pleas court today from U. S. District court. Judge Davis S. Porter said there were no federal or civil rights questions in the case and refused to hear it. But he ordered the film returned to the defendant, Malibu, Inc. operators of the Guild Theater in Cincinnati. The charges were brought by Charles Keating, founder of the Citizens for Decent Literature.

The earliest mentions of the Guild Theatre in Boxoffice are in 1949, when it was already running foreign films. The most recent mention of the Eden Theatre I’ve found is from March 30, 1946.

The November 16, 1935, issue of Boxoffice reported that Willis Vance would open a new theater at Peebles Corner to be called the Eden. It was to have about 300 seats.

Eden Theater address was 782 East McMillian Avenue as of the 1944 Cincinnati,Ohio City Directory.Charles F.Clarke was its manager.

This item about a movie theater at the Guild’s address appeared in the March 1, 1913, issue of Motography:

“The Cincy theater, a moving picture theater on McMillan street, near Peebles corner, Cincinnati, was transferred from John Hagerty to George W. Vaughn on a lease which is written for one year. The theater is at 782 East McMillan street. The lease is at $100 a month.”

While it’s possible that the Cincy Theatre was in an earlier building on the same site, the side walls of the Guild’s building do look sufficiently worn to have been there since the 1910s or earlier (it was listed at this address in the 1910 city directory.)

Also, I doubt that a brand new neighborhood house built in 1939 would have been as narrow as the Eden, which is another indication that it was most likely an older theater remodeled and reopened at that time. However, I’ve been unable to find any references to the house between 1913 and 1939. It might have operated under other names.