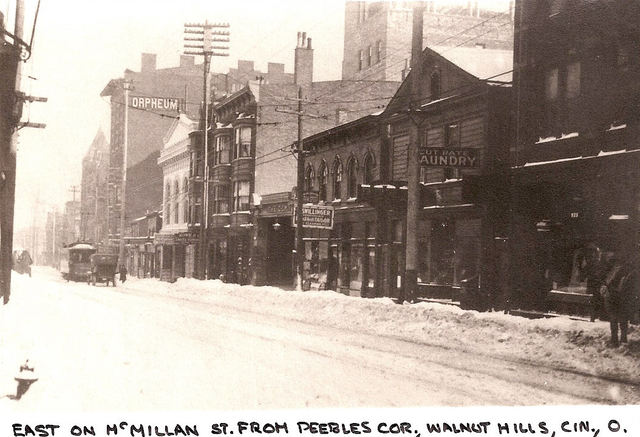 The 1,200-seat Orpheum Theater was owned and built in 1909 in the Peebles Corner section of Cincinnati by Colonel Ike Martin of Chester Amusement Park renown. It opened December 19, 1909. The Orpheum Theater was erected to deliver high class vaudeville to the city without being affiliated with a major vaudeville chain until William Morris joined forces with it a few years later.

This was the only “double theater” built in Cincinnati during the early days of filmdom. Though the Orpheum Theater started as a single screen theater in 1918, it added a 1,000-seat second screen on the sixth floor of its parent structure. In the early silent days both organs in the theaters were connected so that one organist could play on the first floor and it would be repeated musically on the slave instrument five floors above.

The second auditorium on the sixth floor was serviced by a passenger elevator and the side walls and roof of this cinema were built of large glass panels which could be opened to capture any passing breezes in the hot sticky summer months. The theater was known as the “sky theater”, something like an interior airdrome theater.

Hello WayneC,What a terriffic place to play at Cowboys and Sheriff with real guns. Did you have passes to all the other RKO Theaters in Cincinnati?Maybe the near by Paramount Th.? Do you still live in the Nati area?Have you visited the Peebles Corner Area to see what the vast changes are?Where was the projection booth located? Were there opening and closing curtains and were there more than one set of drapes?Was there any stage scenery left from the earlier days?Could you tell us about Mr. Earl (J.)Graham (the manager), I found an obituary about Earl (A.) Graham from the Enquirer of Nov. 7,2001 he was aged 87, but I doubt that this is the same man. Did you remain in the cinema business? Did you ever get to hear the Wurlitzer at the Paramount Th?Your recall if splendid hope you can tell us more.

I could get passes to all of the RKO theatres in Cincinnati, although I didn’t use the perk all that much. Maybe to the Albee and quit often across the street to the Paramount.

I’m not quit sure what the ‘Nati’ area is to which you refer. I now live in Venice, Florida, but visit Cincinnati frequently. And yes I have noticed the Peebles Corner area. Quit a change from the mid to late 1940’s, but I guess that’s gone – forever, at least in my life time.

Relative to the project booths: I would visit these occasionaly, and what a magical place that was. This was when I learned that the film being projected had a sound track on the left side of the film. This would was ‘read’ by a lighted box – not sure what it’s called, and this would make the sound. When the film was passing through the projector it would flash various codes to the proejector operator signalling him when to swith to another projector. As the film was produced in reels of about 35-45 minutes in length, and they needed a way to switch to another reel once one was completed. They did this rather seamlessly (usually). Today they make the films in reels about 5 feer in diameter, and can usually get a full length movie on one reel.
There were located on the second balcony.

Yes, there were opening and closing curtains. There were rather massive – I would say 20feet by 60 ft., and there were 3 layers or so. They would open and close them between each picture showing. I sure they must have been used when there where vaudeville shows.

Not sure if the EJ Graham you mentioned was the same. Could have been.

No I no longer am with any cinema business. Would like to take the trip to TMC’s upcoming event in LA this spring.

Did not get to hear the organ at the Paramount. Remember that the one at the Orpheum was played once.

Hello WayneC;The device on a film projector which reads the sound is called a sound scanner. Most old film prints ran about 20 minutes and the cues for the projectionist were printed in the right hand corner of the film print which was projected upon the cinema screen. This printed signal told the projectionist when to start the second machine to complete a smooth film changeover. Thats the little I have gleaned about film projection. The (Nati )I refered to was a shortened version of the word Cincinnati taken from a litter ad which ran on tv here encouraging people not to “Trash the Nati!” I’m guessing that AMC in L.A. stands for American Movie Classics? What goes on at that event? If you’re back visiting Peebles Corner a great local restaurant in that area is called (The Parkside Cafe)on McMillian Ave. Do you know anything about The Century Theater of 1914 on Gilbert Ave? As you mentioned Tyrone Powers was an usher at the Orpheum and Paramount Theaters ,he took his training at The Schuster-Martin School on Kemper Lane, which later became The Little Playhouse.Also the Twenthieth Century Th., in Oakley opened in 1941 with Tyrone Powers in “Blood and Sand”. You probably know that Mrs. Wurlitzer had the Paramount Th. built in 1931, but because Cincinnati was an RKO dominated town they took over her operation. So strange for a Paramount Th. to be affilated with RKO and not Publix Films which was their studio film distributor! Any more recall about your Orpheum days?

I grew up around Peebles Corner in the late30’s and 40’s, attended Assumption church and school on Gilbert ave…..my dad, Earl Graham, managed the Orpheum in the late 40’s…..never missed a double feature there ….walked across the street to the Paramount for big Technicolor shows with B etty Grable, Alice Faye et al. Harris Rosedale and wife Roberta ran a local dance studio….occasionally staged an amateur show 0n the Orpheum stage.

To rather belatedly respond to hanksykes question of March 14, 2012, regarding the Century Theatre, I found this item in the November 11, 1916, issue of The Moving Picture World:

“Cincinnati, Ohio. — The Century theater at Peebles corner, which has been at various times used with some success as a picture house, with interims of vaudeville, is to be turned into a public market, according to plans which have been perfected by local interests with capital behind them. The Century has been idle for the past two years, in spite of its apparently fine location, right at one of the busiest suburban corners in the city, its proximity to the popular Orpheum being largely responsible for its failure to prove a success. It was built in 1909 for use as a moving-picture house by John J. and Edward Ryan.”

To Hank Sykes. The sound Scanner as you referred to it is wrong. In my days as a projectionist it was always called an EXCITER LAMP. You always had to have spares because if it burnt out you could just take it out and put in a new one. Then when Cinemascope came along with 4 track stereo on the film there was a magnetic reader like a tape player installed to read the magnetic stripe. If your theatre did not have stereo the film was played optically from a track on the film.

The Orpheum launched December 19, 1909 and the Orpheumscope with moving pictures was a part of the opening bill.

Hello Enthusiasts of Cincinnati’s Walnut Hills Theaters! I am so glad to have found you all! I am a Historic Preservation Architect working on a masters thesis project on Peebles' Corner and it includes the theaters of the Walnut Hills area.

First are Wayne C, HankSykes, Otto18, Joe Vogel, dickneeds111, and dallasmovietheaters all still members or active with this website?

Where exactly was the Century theater besides 1914 Gilbert, because that address does no show up on the auditor website any longer? Was it possible three buildings down from the intersection of Peebles' Corner on the southwest corner (bottom left)? The old photos show that theater at Peebles' __________…I cannot make out the name. The theater that I am referencing is next door to the 4-story Durner Building on the same left side of the street. I have some more questions about the Orpheum and as many other buildings around that bustling area of Peebles' Corner for anyone of you that may remember them from1900’s to current. Thank you!!! Dan

Cheersdan: A city directory published in June, 1910, lists the Century Theater as being on the west side of Gilbert Avenue south of McMillan Avenue. The Peebles Theatre is not listed in the directory, so your surmise that the Peebles and the Century might be one and the same is probably correct.

There is a mention of a Peebles Theatre in the August 1, 1891, issue of The Cincinnati Enquirer, but the mention doesn’t give enough information to determine if it was the house at 2445-2449 Gilbert. If it was, though, the Moving Picture World item I cited previously was mistaken (not at all unusual for such trade journals) about the house having been built in 1909. It would probably have been converted to a movie house that year.

There is also a classified ad in the May 22, 1930, issue of the Enquirer offering for sale “A PROMINENT CORNER McMillan St. Brick building, consisting of 3 large stores and 10 flats; Peebles theater: $10,000 cash, balance good terms or trade.” If that item referred to this Peebles Theatre, then the building still housed a theater in 1930 and the planned conversion to retail noted in MPW item must not have taken place, or was reversed at some point.

I’ve been unable to find the Peebles Theatre listed in any available editions of any of the theatrical guides from the late 19th century, so I don’t know anything about it. The entrance building is too small to have held a significant theater, but the building across the alley behind it and extending up to McMillan Street looks like it could have been converted from an auditorium. The best way to find out is if you can get hold of some old Sanborn Fire Insurance maps from the period. It’s possible that Cincinnati’s public library has some. I’ve never been to Cincinnati myself and live in California, so I won’t be able to unearth anything that isn’t on the Internet.