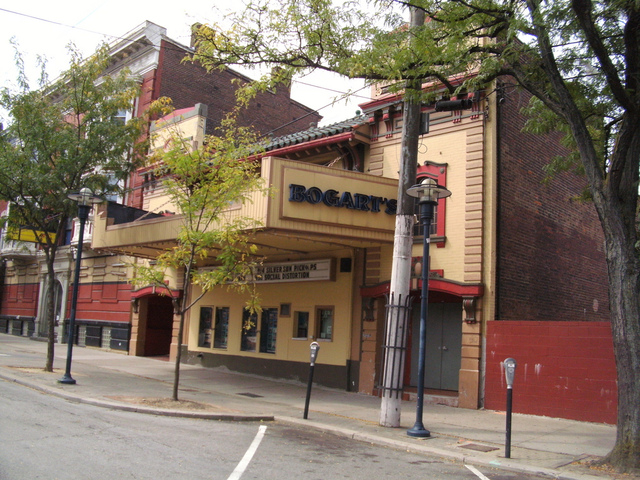 The theatre began as the Nordland Plaza Nickelodeon and Vaudeville Stage, in 1910. By 1925 it had been renamed Columbia Theatre, and had closed by 1930. It finished as the Nordland Theatre operating as movie house until 1955. After the 1950’s it served several purposes, including the Inner Circle Restaurant in 1965, which didn’t last long. Surviving today as a popular concert venue named Bogarts, catering for the college crowd from the nearby University of Cincinnati. Its exterior is well maintained nearly as it was from the nickelodeon era.

Originally the lobby was open to the sidewalk, but early in its operation an enclosed lobby was added. The stage-house where vaudeville acts performed in the early years is today the site of rock band activity and most seats have been removed to allow the audience to stand during the music events.

I’ve also seen this theater listed as the NORDLOW and the NORTHLAND?

A little more detail on that Mighty WurliTzer Theater Pipe Organ. It was a 2 Manual/7 Rank and additions and/or alterations were made to it on July 15, 1913. It is unknown what happened to the organ after that. If you know anything about the organ, please email us!

Trying to reconstruct what happened 95 years ago can be sorta confusing and it turns out the organ information I gave above was for two different organs mixed into one which is sota what happened, I think, but let me start all over.

WurliTzer, Opus 745, a 2/3 was shipped to the Forest Theater in this same town on December 4, 1923. It was reposessed and parts went to this theater on June 1, 1927. Those parts (perhaps the entire organ?)then went on to a private owner in Louisville, Kentucky in 1960.

If you know anything else about what happened to these organs, please email us!

“Gee Dad, it "WAS” a WurliTzer/WurliTzer!"

They actually have very popular acts appear at Bogart’s to this day. Great place for an intimate-style concert.

Listed as the Nordland Theater in the 1961 city directory. A current photo can be seen here:
http://tinyurl.com/dhdv9u

The theater’s name is missing a “d” in the middle. All the sources that I’ve seen, period and modern, call it the Nordland Plaza or Nordland. It was probably located in one of Cincinnati’s old German neighborhoods.

The Nordland Plaza is mentioned in a few publications from the 1910s that are available at Google Books. The most useful is this, from the trade journal Domestic Engineering, issue of November 16, 1912, which indicates a probable early 1913 opening for the Nordland Plaza Theatre, and names the architects:

“One of the latest propositions is the Nordland Plaza, which will be built on Vine Street, near Charlton, several squares from the Columbia, as per plans by Architects Stewart & Stewart. The general contract has just been awarded to Oscar Schroeder and the plumbing to Henry Niemes, of 4112 Hamilton Avenue.”

A slightly earlier issue of another trade journal, The American Architect, also names Stewart & Stewart as the architects, and gives the address of the parcel where the theater was to be built as 2623 Vine Street.

As Bob Jensen noted above, the Nordland Plaza Theatre had a Wurlitzer installed in 1913. The stage end of the auditorium was pictured in an advertisement for the Rudolph Wurlitzer Company in The Moving Picture World, October 25, 1913. The ad says the Nordland’s unit was a Wurlitzer Motion Picture Orchestra.

Although the web site for Bogart’s, the club now occupying the theater, says that the house opened as the Nordland Plaza Nickelodeon, I can’t find any evidence elsewhere on the Internet that Nickelodeon was ever part of the name, or that the house even operated on a five-cent policy. I note that Bogart’s site also gives the year the theater opened as 1890, so I’m inclined to consider it an unreliable source.

Current activity has seen a great deal of sprucing up within Bogarts which was long overdue considering some of the national acts which play there,a salute to Bogarts new management!