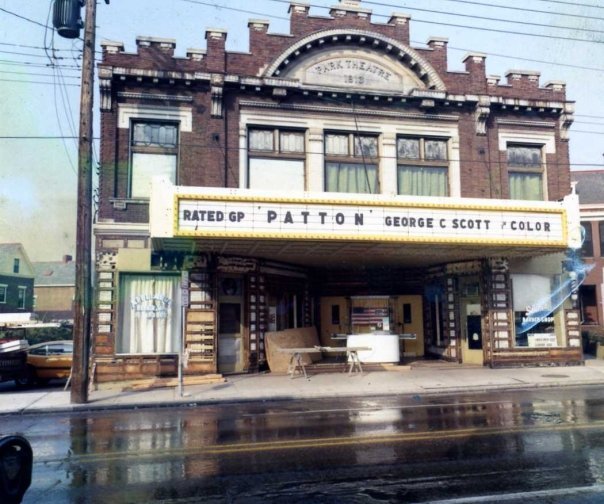 Located in the Northside neighborhood just below Clifton after the Ludlow viaduct, the Park Theatre opened November 25, 1913.

According to blogger Steven Thompson, the theatre later operated as simply the Alpha Theatre and showed adult films into the early-1970’s, often running afoul of the same over-vigilant vice squad that had also shut down screenings of Russ Meyer’s “Vixen” at the Guild Theatre. They later switched their booking policy to repertory fare and changed their name to the Alpha Fine Arts, showing double features. Ironically though, their last attraction before closing was an X-rated film - Roger Vadim’s “Charlotte”.

After ceasing as a movie theatre, in the 1980’s, the Grote family opened a bakery franchise in the space. It later housed a used furniture store and in 2009 is in use as an appliance repair store.

THanks I got there sometimes the search won’t work.

Thanks to everyone for your memories of the Alpha/Park Theatre! Also thanks for the pictures of the exterior of the building. I have none from that era. It was indeed first called the Park Theatre, followed by, I believe, the Alpha Six Cinema, the Alpha Cinema (during the Adult film days, including Deep Throat) and finally, The Alpha Fine Arts Theatre. The Theatre’s Fans just called it The Alpha. As I understand, the Park did small stage shows and showed Silent Movies when it first opened in 1913. The remnants of pipe organ bellows were still under the small stage. We (Carrlyn and myself along with Rob Duggan) took over the lease when the California based company that showed Deep Throat told us to lock the doors and walk away, having lost the obsenity case filed against them by the City Fathers. We were only employees prior to that time and decided to try and make a go of it under the name Alpha Fine Arts Theatre. And yes, the staff dressed as Doctors and Nurses during the run of Deep Throat. For several years we put our hearts and souls into showing what we felt to be quality film entertainment. It was a blast and a time of my life I will never forget! Eventually, we were forced to close the doors and give up our dream. We could no longer compete with chain theatres that sought to show some of the same films, as we never had the money that the Big Boys had at their disposal; Just alot of guts and determination. I ocassionally drive through Northside and experience a supreme sense of sadness to see the Alpha in it’s current incarnation. I guess we should be grateful the building has not been raised as so many others have been. I still have dreams about the Alpha and of all those who worked so hard with us to make the Alpha what it was. I dedicate this to my friend Andre' LeClaire (former Projectionist at the Alpha), who recently passed away. I will always remember us dressed in Gorilla costumes to promote the film SCHLOCK, and riding around downtown Cincinnati in a Fiat convertible, handing out fliers and autographed bananas on Fountain Square. Never mind that is was April 4,1974, a day after the Sayler Park F5 tornado hit, and people were not amused by our antics. So long Andre'.

Thanks for checking in, Tim. I worked with Andre when I was at the Mt. Adams Cinema and he was with Parallax (right before he moved to L.A.) and am sorry to hear he passed away. He was the best projectionist I ever worked with. And, hey, the first time I went to the Alpha under your ownership was to see SCHLOCK! (Tina was working that night…)

Actually I remember the last movie that played there. It was Vincent Price movie “Wax Museum” in 3-D …… There were about 10-15 people there that night…… Then about a week later closed sign was put up….

I uploaded a couple of photos of the Alpha when the marquee was still in place and intact. The photo showing Charlotte on the marquee was for the Cincinnati premiere of the film and not the run before we closed and Parallax had their brief shot with the theatre.

Thank you soooo much for all the memories of the Alpha. I was just reminiscing with some friends about it, and we couldn’t remember the name of the theater. I googled it and voila! I saw Charlotte there, but don’t remember that it closed right after. Wow! What a flash from the past! Thanks everyone – but especially THolloway!

The January 17, 1914, issue of The Moving Picture World had an item about the Park Theatre:

“The new Park Theater, at 4189 Hamilton avenue, Cincinnati, O., was opened recently by John J. Vogelpole, [sic] who is president of the company which built the house. Over 100 members of the Master Plumbers' Association, of which Mr. Vogelpole is a member, attended the opening performance. After the show the guests enjoyed a spread tendered by the plumber-exhibitor.”

The opening of the Park Theatre took place on November 25, 1913, and was noted in the following day’s edition of The Cincinnati Enquirer. Both MPW and The Enquirer misspelled Mr. Vogelpohl’s surname.