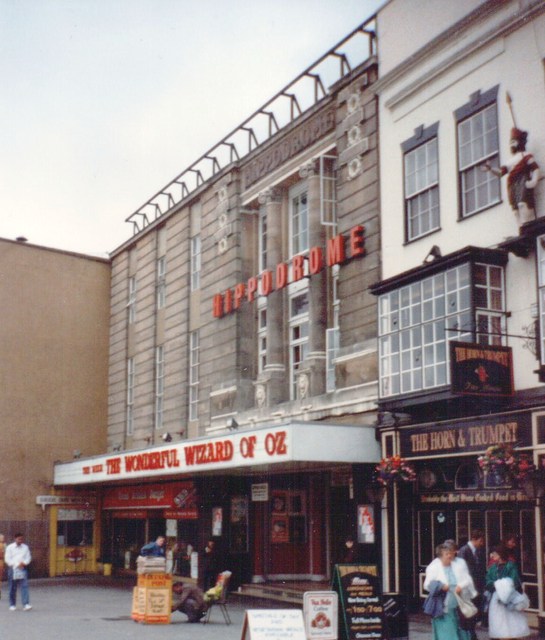 Located in Bristol city centre. The Bristol Hippodrome Theatre was opened on 16th December 1912 with a variety programme headed by Eugene Stratton and a melodrama which contained a water spectacular with diving horses entitled “The Sands O-Dee” which ran into January 1913. It was built for Oswald Stoll, and was the last theatre to be designed by noted theatre architect Frank Matcham.

The original facade was carried up in the form of a big, square tower, with Tuscan columns at second & third storey levels. It was topped by a steep pavilion roof which was crowned by an elaborate metal structure. In the 1960’s the top of the tower was removed, as were most of the decorative details.

The Italian Renaissance style auditorium has seating provided for 867 in the orchestra stalls, 519 in the dress circle and 535 in the balcony, with nine boxes on each side of the 40 feet wide proscenium which seat a total of 70. The theatre has 15 dressing rooms. When it first opened the Hippodrome Theatre had a huge water tank in what today is the front orchestra stalls, which could fill with 10,000 gallons of water in one minute when spectaculars and circus performances were staged. In the early-1920’s Bristol born Archibald Leach worked as a call boy at the theatre before joining an acrobatic troop and travelling to the USA, then becoming famous as Cary Grant.

The Bristol Hippodrome became a full-time cinema as part of the Stoll Circuit from September 1932 with the film “Congorilla” until August 1938 when it reverted back to variety theatre use. It was damage by a fire on 16th February 1948 when the stage house was destroyed, but thankfully, the auditorium was untouched. It continues today as a leading touring theatre for the south west of England and is a Grade II Listed building.