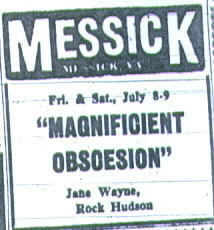 The Messick Theatre was operating prior to 1941, and continued until at least the mid-1950’s

I got the following note from a Poq. native with memories of the Messick

The Messick Theater was located at 1279 Poquoson Avenue near Trinity United Methodist Church. It started out as home which was sold to A.D. Page, J.W. Rollins, and J.T. Rollins, trustees for the Charity Conclave Number 5, Heptasophs or Seven Wise Men for $50.00. It was sold by Littleton and Jannette Watkins on October 2, 1896. The Heptasophs sold the house to Linwood I. Burcher who then converted the building into the Messick Theatre. It had a half bricked front and tickets were bought from the front booth. Tickets cost 25 cents and a popcorn machine was located to the left after you entered the doors into the foyer. It also contained a staircase which led to the balcony and the projection room. It was sold again in June of 1974 to James Moore who bought the Theatre as an investment I know one of the movies shown during the second time was Dr. Zhivago.

There was a silent Messick that operated from about 1925 to 1930 at 6 Messick Road. It was condemned by the state to widen the road. Pottsie Martin, whose mother lived there, told me that the house was cut into and the back of the theater became the front of the house. His parents added a new back to the house and it is still there on Messick Road.

The Messick Theater closed in the early 70’s. The last listing that I found in the local newspaper was in June 1971 however the Poq. City Directory has a listing for the Messick as late as 1974, nothing after that.

The Messick Theater was remodeled into a private home and sits there today. It was up for auction a couple of weeks ago.