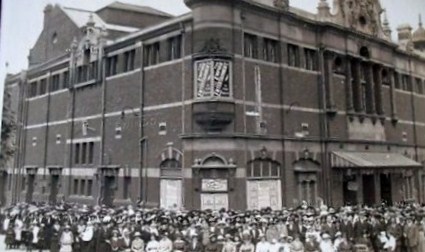 Located in the centre of Swindon, Wiltshire at the northern end of Victoria Road on the corner of Clarence Street and Groundwell Road. The Queens Theatre was built in 1897/1898. It was designed by Bristol based architects Messrs, Milverton, Drake & Pizzey. It had a 35 feet deep stage, the proscenium was 29 feet wide, and there were many dressing rooms. From 1908, films were screened as part of the programme. By 1914, it had been re-named Empire Theatre and Alfred Manners was the proprietor. His son took over from 1921.

In the late-1920’s it was operated by Gladwell & Collins, and Western Electric sound was fitted in 1930. It then came under the management of Swindon Entertainments and became part of Cinema Proprietors of Birmingham. Taken over by the Mayfair Circuit (Control) Ltd. in 1939, the company was operated by George Elcock & Arthur Cohen.

Arthur Cohen continued to operate the Empire Theatre as a cinema until it closed in the mid-1950’s. The building became derelict, and was demolished in June 1959. A building named Empire House was built on the site, which contains shops and offices.

Mayfair Circuit Control was part of ABC .. Salberg and Clift Still held an interest in the building