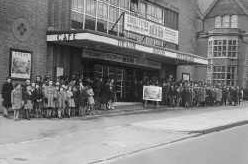 Located on North Walls at Saint Peter Street, Winchester, Hampshire, and built on the site of an old school which dated from the 1880’s. The Regal Cinema was built for A.N. Kendall Ltd. and opened on 7th June 1933 with Renee Gadd in “Letting in the Sunshine”, with Renee Gadd appearing ‘in person’ on opening night.

The exterior of the building was in plain brick having no decoration, with only a large central window over the entrance. Inside the auditorium, seating was provided for 816 in the stalls and 316 in the circle. The decoration was in an Art Deco style, and organ chambers were on each side of the proscenium, but the Compton 3Manual/8Ranks organ wasn’t installed until 8th January 1934. The organ console had a unique illuminated ‘box’ design, and the instrument was opened by organist Geoffrey Keith. The Regal Cinema also had a cafe for the convenience of its patrons.

The Regal Cinema was taken over by the Oscar Deutsch chain Odeon Theatres Ltd. on 6th November 1935. It was re-named Odeon on 29th December 1935.

Taken over from the Rank Organision by the Leeds based Star Cinemas chain on 3rd January 1971 and re-named Cinema, it was sold to Star Cinemas on 23rd August 1971. They sub-divided the cinema, creating a 500-seat Star Bingo Club in the former stalls and two screens in the former circle seating 107 & 112, and another in former cafe space seating 140, it re-opened on 16th March 1972 as Studios 1-2-3 with “Straw Dogs”, “Please Sir”, and “Song of Norway”.

The entire building was demolished and a block of retirement home flats named Richard Moss House was built on the site.

Does anyone know of a ghost in Winchester in what used to be the Regal Cinema, on the corner of North Walls and St Peter Street ? I now live in the new block of flats that was built on the site of this cinema, and my fellow residents tell me that there was a murder committed in the cinema, with the ghost of the victim continuing to haunt the location. The Regal Cinema was built in 1933, then renamed numerous times to The Odeon, The Cannon, etc. Prior to 1933, the area was the site of a school, I believe. I would appreciate any information anyone may have on this – I’ve tried various Internet searches on the subject, but have found nothing to date. Thanks!

I went to the re-opening in 1972. It was a hideous place, awful screen and sound, cramped and stuffy. Before conversion, the place had become extremely tatty but had a good atmosphere.

Also for some years in the 60s, Winchester City Library was housed in the former cafe area

The library moved into the café in May, 1961 and the County Archive has photos of the café in use as a library. Readers came through the cinema entrance doors and upstairs from the foyer.

Just come across this. I was general manager here when Star took over in 1972. The screens were interesting in as much as they were the first in the UK to use periscope projection.However the presentation left a lot to be desired and the studios were cramped and hot with awful, but trendy, lighting. The bingo hall was a lot more fun but even after investing in the products from the bar I saw no ghosts.I went on to manage the Curzon in Mayfair which was, and is a a very different sort of venue. Andrew.