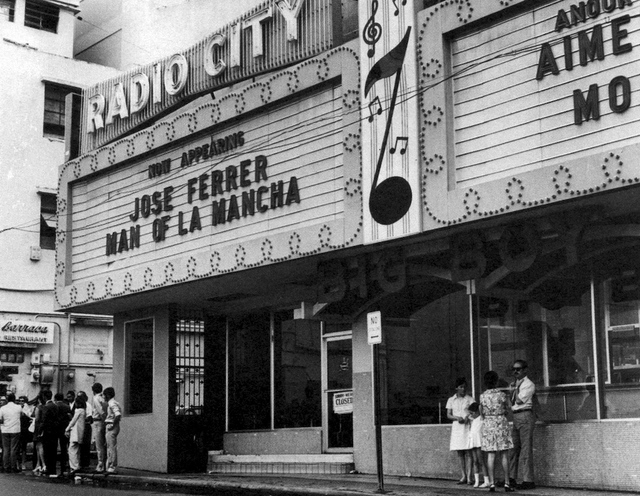 This theatre was the centerpiece of the locally owned Cobian movie theatre chain. It was the largest Santurce cinema with a huge main floor and a large balcony. During the 1960’s and 1970’s all of the prestige Hollywood movies played there.

From "Love Story" to "Jaws" to "King Kong" to "Close Encounters", they all played exclusively at the Teatro Radio City. It was very common to see long lines at most of shows. Between blockbusters, the Teatro Radio City would also play AIP pictures such as " Dr. Phibes" and other Vincent Price- Peter Cushing movies.

The Teatro Radio City closed down in 1983. It then became a protestant church . In the late-1980’s it was bought by a local entrepreneur who turned it into a place for showing plays and concerts, but the plan was not a success.

The Teatro Radio City became abandoned, awaiting someone with the vision to turn it back to its former glory… It is now a television studio and has some live performance use.

The Radio City will be the site for “Objetivo Fama” a Latino “American Idol” type television show that will be shown on TeleFutura, a Univision channel. Good to see the old Radio City open again!!

The Radio City was the place to see the James Bond films.
One error in the introduction above: “Close Encounters” played simultaneously at the UA Cinema 150. In fact, the Radio City and the Cinema 150 often screened the same films. For instance, I recall going to the Radio City as an alternative on account of the long lines and sellouts at the 150, including “The Towering Inferno” and “Superman”.

Does anyone know the current status of this theater?

Isn’t it a church now?

The Radio City and its next-door neighbor the Excelsior were also owned by Wometco Commonwealth.