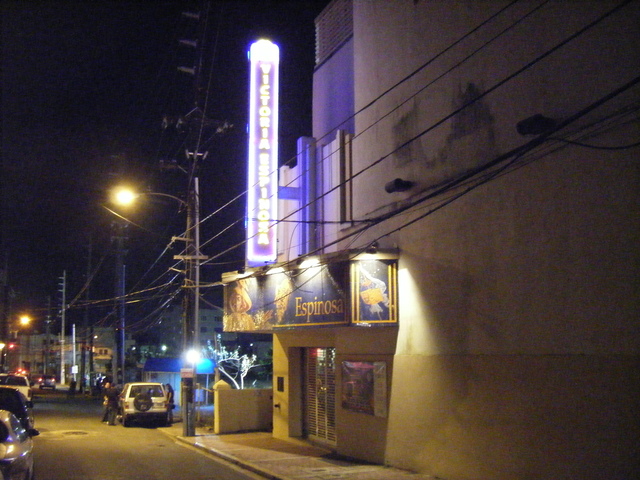 This movie theatre was part of the Del Parque street movie section that included the Teatro Radio City, Excelsior, Rex and Teatro Matienzo. One of the first features shown there was "The Robe" back in the 1950’s.

It was later run by MGM, along with the Metro. During the 1960’s and early-1970’s, it only showed MGM movies (the ones that were not important enough to be shown at the Metro) and Disney features.

The Teatro Music Hall is known to a whole generation of fans as the place to see all the great kiddie movies. From the "Absent Minded Professor" to "Swiss Family Robinson" to the "Tom and Jerry" festivals, they were all shown here.

In the late-1970’s, MGM sold the the theatre and it stopped being the great place for kiddie movies. It became an independent theatre and the quality of films dropped considerably. It featured mostly obscure titles, although the ocassional gem such as "Tati’s Traffic" would appear out of the blue.

In the early-1980’s, all of the Del Parque street movie houses began closing one by one, and the Teatro Music Hall was no exception. The last movie to play there was the lackluster film "Players" starring Ali McGraw. The name of that movie remained on the marquee for years.

In the mid-1990’s, the Puerto Rican government began a project to convert it into an experimental theatre venue. It seemed like a great idea, but as usual, they botched up the job. They completely tore down the interior of the theatre and only the outer shell remained!!!! And if that wasn’t bad enough, they ran out of funds and let it stand in that condition for years. A sad ending to a place that brings so many wonderful memories to so many.

Way back during my elementary school years (Academia San Jorge), we often took trips to the Music Hall. I’m not exactly sure, but I suspect that the Sisters at the school had an intense devotion for the 70 mm Biblical spectacles. On one ocassion, just before the “Semana Santa” (Holy Week), we watched “Ben-Hur”, and I recall almost every third-grader being in a state of terror during the sea battle scene. And, of course, the chariot race just blew everyone away!
My dad and uncle took turns every month or so taking us neighborhood kids to the Music Hall to see the Disney flicks.

Have they finished the renovation?
To JSA: The Music Hall did not have 70mm equipment. Ben Hur premiered at the Metropolitan. However, it was the first theater in PR to install CinemaScope. When Cobian took it over from Llamas he renovated it, changed the name from Oriente to Music Hall and opened it with The Robe. Years later, Cobian took back his original circuit which he had leased when he temporarily retired from the movie business to go into politics and baseball == yes, baseball, he owned the San Juan Senadores team for a while == and gave the theater and the other Llamas theaters back to the Llamas Circuit.
When Cobian took back his theaters he joined the persons who had leased them from him and formed Commonweat Theaters. Andres.
Trivia: When then Senator John F. Kennedy and wife Jackie first visited PR they stayed at Cobian’s penthouse apartment at Condomino San Luis next to the Caribe Hilton.

“Ben-Hur” premiered at the Metropolitan years before I was born!!! I was a Third Grader in the early 70’s. Could it have been a 35 mm print? (I’m not sure if they even made 35 mm prints of this movie… have to check that out) Or, could they have installed 70 mm equipment by then? I also remember that this film was shown at the Cinema 4 sometime in the mid to late 70’s. A few years ago, “Ben-Hur” was screened at the Cinerama Dome in Hollywood (my residence is in the Los Angeles area), and I had the chance to see it in a large screen again. This film is totally “un-watchable” on TV, no matter the format. Also, I used the term “70 mm Biblical spectacles” in a metaphoric sense, since all the movies they took us to see during Holy Week were the Biblical epics, such as “The Ten Commandments” (in VistaVision), “The Bible” (in D-150), and so on. As you know, these movies were at the time (and to this day) huge, and bigger than their own Director’s ego!

Regardless, thanks for the historical information! I always thought that the Metropolitan was the first theatre in PR equiped with CinemaScope! I have been searching, as a kind of hobby, information relative to the theatres in PR. Things like projection, sound system, screen size, what movie premiered were, etc. Outside of this web-site, I have found very, very little.

Before I get corrected, let me do it first! Did not mean to imply that I saw “The Ten Commandments” or “The Bible” at the Music Hall. During grade school, they would take us once in a while to different theatres in the Santurce area, for special screenings during school hours. We usually went to the Cinerama, the Grand (which was near my school) or the Music Hall.

Hello, JSA, and a Happy New Year to you too!!!!!
You know, you are probably right after all. Before home video the studios re-released their top movies on first run theaters. Also, schools used to rent theaters in the morning to show special films to the students. On Easter, some first run theaters played biblical films up to Good Friday — though some played them up to Holy Saturday and Easter Sunday, more on this later — and then opened their Easter attraction on Holy Saturday. The first 70mm film to play in PR was South Pacific at the Metropolitan. The following year Ben-Hur premiered there so it was probably the 70mm print. The Metropolitan was renovated and opened as a roadshow (2 shows a day) house with Around The World in 80 Days in 35 mm scope with a terrific stereo soundtrack. The “first” 70mm film was Oklahoma, filmed in both Cinemascope and Todd-AO 70mm because at the time they could not do 35mm reduction prints because of the different frame-per-second speed. Later the problem was solved and 35mm prints could be made fom 70mm negatives. You probably know all this and that 70mm films were made in the early 1930’s such as The Big Trail with John Wayne and The Bat in Grandeur 70. Back to PR:
The Puerto Rico and then the Metro and the Cortes installed 70mm. The Puerto Rico never showed 70mm, its equipment was later transferred to the Cinerama when they stopped making 3-strip Cinerama films and “Cinerama” films began to be filmed in 70mm Super Panavision. During the first Easter that the Plaza 1 and 2 where open, the 1 was showing Sweet Charity and the 2 — the smaller house — The 10 Commandments. At about noon on Easter Sunday, the manager called me and told me there was a “motin” at the box office because 10 Commandments was full and Charity had sold less tan a 100 tickets. I told him to switch the films and Commandemts went in the 1 and Charity to the 2. We made a lot of money, Commandments played for about 2 weeks, I think.
It’s a shame that NY, “the capital of the world” — where Cinerama was born — does not have a Cinerama theater. Best, Andres.

It is interesting that you mention “Around the World in 80 Days” and the stereo soundtrack. I vaguely remember someone in the mid or early 80’s complaining in El Nuevo Dia about the poor “quality” of sound in some of the theatres (which shall remain un-named!) back then. He then went on raving about the Metropolitan and specifically mentioned two movies: “Around the World…” and “The Longest Day” as having a superior stereo sound. I know how terrific the Metropolitan sound was, because I saw “Tora! Tora! Tora!” there, and as young
child, both the images and sound caused an incredible impression in me, second only to “2001” at the Metro.

PS: Are there any plans to restore Cinerama in NYC? The Dome here at LA screened a 3-strip “How the West was Won” in November. Although some “purists” complained a bit, I thought that it was a great experience, with some of the sharpest color images I have ever seen on screen.

Hi, JSA:-
Cinerama premiered at the Broadway Theater here in 1952. It is the only motion picture to be reviewed on the front page of the NY Times. And today, when Cinerama is being revived in LA, Seattle and other ciies around the world, NY, “the capital of the world,” does not have a Cinerama theatre. The only single screen house left in NY is the Ziegfeld, which has a terrific projection and sound system. In the late 70’s or early 80’s, they showed a 70mm print of “This is Cinerama” in a curved screen they installed in front of the regular screen — the regular screen is pretty big, wall to wall, but is not curved.
The only big movie palace of old left here is the Mayfair (later renamed as the DeMille and then triplexed and became the Embassy 2-3-4 — The Embassy 1 was a block down the street and is now te NY visitors center. It is on 7th Ave. and 47th St. and has been closed or years. The marquee says it is for rent, but nothing has happened. I have suggested on its page here at Cinema Treasures that it be renovated as a 3-strip Cinerama/70mm house. I have also written to “everyone” from a contact I have at City Hall, to the president of the NY Tourism Co. whom I happen to know, to members of the City Council of the culture/film/theater commitee, to Donald Trump, to no avail. Now I am thinking of writing to former mayor Ed Koch who is a die hard movie fan and writes a movie column in a local community paper, The Villager. I think a Cinerama house here would be a terrific tourism attraction.
By the way, JSA, feel free to contact me directly at
Best, Andres.

JSA:=
Forgot to tell you…
Have you seen the special edition DVD of the original King Kong? There’s a docu on Merriam C. Cooper that mentions his involvement in developing Cinerama which includes a segment of the opening scenes of This is Cinerama made to look as if it is shown on a big curved screen.
Also, in the 50th anni DVD of Oklahoma, there is a featurette showing the filming of the CinemaScope version and the 70mm Todd-AO version. A shame they did not put the same scene of both versions together like they did some years ago on American Movie Classics. There they had a scene in CinemaScope at the top and Todd-AO at the bottom, and you could see different hand and head movements in the same scene. The CinemaScope version was like a “dress rehearsal,” and the 70mm version is real thing. Best, Andres.

Thanks!!! As soon as I figure out my scanner, I’ll send you some “goodies” from the recent Dome presentaion of “How the West was Won”. We gave our son the King Kong Special Edtion DVD for Christmas, but I have not yet seen the special features. Will check it out!
It’s also too bad that they did not do the scene comparison as in the “Oklahoma!” AMC presentation for the “Around the World…” DVD.

Back in the 1970s, the Music Hall played Mel Brooks' Western spoof “Blazing Saddles” and the science-fiction classic “Forbidden Planet”.