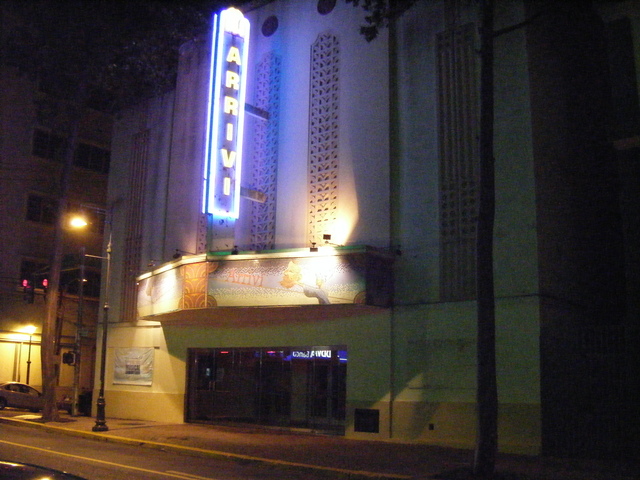 This historic theater was built by the Circuito Llamas, one of the first movie chains in the island.

It was a first run theater for many years. In the 1960’s it became the place to see movies from Mexico, Argentina and Spain. All the Santo movies, the Marisol musicals and the Joselito movies played here. Sometimes after the movie was shown, the star of the musical flick would make an appearance and sing.

In the 1970’s the theater changed its fare. It started to show movie festivals. This was at a time when foreign movies and small American films were generally not shown in Puerto Rico. I remember seeing Brian de Palma’s "Sisters" and Peter Bognanovich’s "Targets" at the Matienzo.

In the late 1970’s, the Matienzo closed down. It became a playhouse. But this did not succeed and it closed down again. For years and years, the old Matienzo just stood there deteriorating rapidly. It actually became an eyesore in the Santurce area.

The state government bought the theater, hoping to turn it into a performing arts center, along with the Music Hall theater next door.

But they did a truly surprising thing–they tore down all the interior of the theater and only the outer shell remained. Then, the government ran out of funds and it stood there, simply a shell, for years. Every year the government said it will finally restore the Matienzo, but every year nothing happened. Finally, one year they got around to restoring the Matienzo, although very little of the original theater remains.

hope you guys enjoy the pics of the matienzo

Any latest news about the Matienzo? Is it succesful as a theater venue? Andres.

I will reserve final judgement for such a time when I visit the Matienzo on my next trip to Puerto Rico, but something is obvious. It should not be called a “restoration” if the theater’s original architectural design was gutted and replaced with a so-called modern, generic look. The Egyptian here in Los Angeles suffered a similar fate: Not a bad theater in of itself, but it is not the grand palace it used to be. But, as with the Matienzo, they are here with us for better or worse, and hopefully it is an indication of better things to come.

My Uncle Carmelo Quijano, was the projectionist for this theatre. I saw Ossesion a Briab DePalma film here and many other films from the 70’s.

I am doing a documentary about Cine Roosevelt. If you have any memorabilia or information about Teatros Cobian, the original owners of the cinema, please contact me at

I remember el Matienzo of the 70’s only playing Spanish movies.

On its Facebook page, the Puerto Rico Historic Building Drawings Society has a great photo gallery of the Matienzo’s (now Arriví’s) interior.