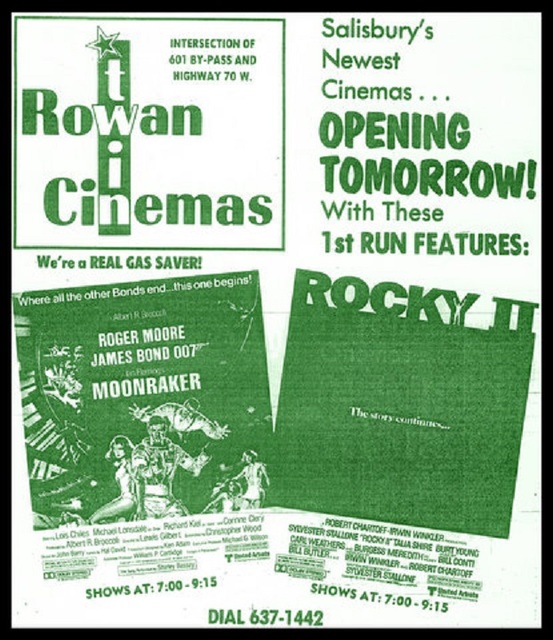 Opening on June 29, 1979, the Rowan Plaza Theatres was Salisbury’s first twin-cinema and the first movie theatre in Rowan County since the opening of the Terrace Theatre in 1969. Located on Statesville Boulevard at the intersection of Jake Alexander Boulevard at the Rowan Plaza Shopping Center in the northern part of the city. Owned and operated under Consolidated Theatres, the premiere attractions for the Rowan Plaza Twin were on Screen 1: Sylvester Stallone and Carl Weathers in “Rocky II” & Screen 2 Roger Moore as James Bond-007 in “Moonraker”.

By the mid-1980’s it was a 3-screen operation. The Rowan Plaza Cinemas showcased some of Hollywood’s best toward the mid-1990’s when it had strong competition from a new multiplex that was built at nearby Salisbury Mall. That put this theatre under stress when it switch formats to showing second-run films at discount prices until it’s closing in 2000.

Consolidated Theatres was a HUGE movie chain in the Carolinas during the 1970’s and early-1980’s. A lot of great blockbusters played here at the Rowan Plaza Twin. “Raiders of the Lost Ark” played here first-run in 1981.

A lot of the Roger Moore-007 flicks played here as well as an alternative to the other Salisbury movie palaces which were the Center, the Towne Twin(which were located Downtown),and the Terrace(that was on the other side of the city). Movies like “Moonraker”, “For Your Eyes Only”, “Octopussy”, and “A View To A Kill” got first-run billing. Also the Timothy Dalton-007 films played here too.

Carmike took over the operations of the Rowan Plaza Twin in the mid-1980’s after it bought out Consolidated Theatres and also Stewart and Everett. It also had stiff competition from nearby Salisbury Mall Cinemas that opened in 1986 as the town’s first-ever multiplex theatre(a six-screen operation). That put this theatre under stress as it when from showing first-run films to second-run features and occasional “B” movies at discount prices under Carmike Cinemas. It was Carmike that basically closed this theatre in 2000.

It was converted to three screens by the mid-1980’s

I DO NOT REMEMBER THIS CINEMA!! If this address is correct, I lived near it during it’s entire time of operation. I would appreciate it if someone could please pinpoint where this cinema was.

SalisburyPaul: I have in my possession the grand opening advertisement for the Rowan Twin Cinema from June 29, 1979 with the opening features “Moonraker”,and “Rocky II”. If you need to see this please contact me at and I will definitely send you the ads. Thank you.

If you don’t mind, I would appreciate it if you would please upload the pictures of the ads so everyone could see them.

SalisburyPaul: Please send me your e-mail address and I will send you the ad. The format that I have the ad on is on Adobe and it will not let me upload the ad from this site.