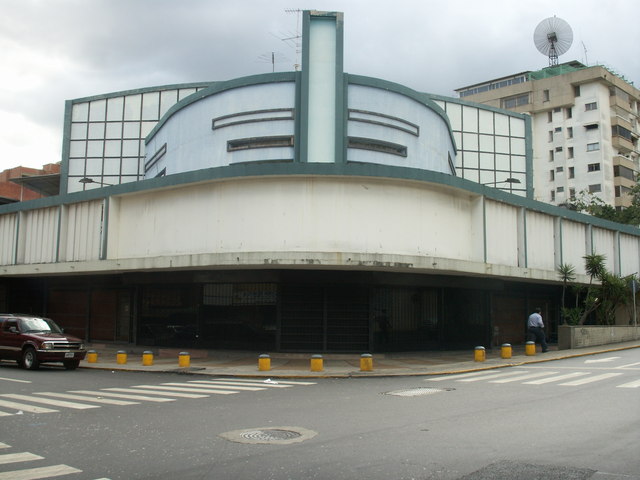 Located near the Country Club in the up-market La Campina district to the northeast of the city centre, at the corner of Avenida Maturin and Avenida Cantuara. The Teatro Paris opened on 16th November 1954 with Jane Wyman and Rock Hudson in “Magnificent Obsession”, plus ballet and dance performances on its stage and an organ prelude.

Designed by architects Gutierrez & Otero, the building was styled after the famous Universum Kino in Berlin, Germany, which was designed by architect Erich Mendelsohn in 1928 (now known as the Schaubuhne am Lehniner Platz). Like the Universum cinema, the Teatro Paris has a curved forward thrust on its façade.

Inside the auditorium, seating was provided on one level. The curved ceiling was replicated in the curved proscenium opening, similar in shape to that at the Radio City Music Hall, New York.

The Teatro Paris was closed as a cinema in 1978. It was converted into a live theatre, re-named Teatro La Campina, which operated into the 1990’s. Since then, it has operated as a TV studio for Radio Caracas Television until they moved out in 2008. Many Latin American stars have appeared here, and now have their plaques on the entrance floor, similar to the Hollywood Walk of Fame in Hollywood, California.

The building remained vacant and was demolished in July 2020.

It is architectural protected building Caracas city council. It is under rescue&renovation. designed by Arch Antonio Fuenmayor Sotillo RPI ´43 Troy NY USA this has been certified checking the blue print signad % CIV 938 professional collegation number. It is hapen sometimes there are many problems researching in VNZLA