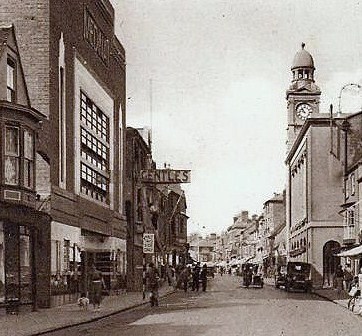 Located in the centre of Newport on the Isle of Wight, off the southern coast of England. Built on the site of the Medina Hall, which had opened by 1889, and by the 1920’s it was in use as a cinema. It was demolished in 1935.

The Medina Cinema was opened on 18th April 1936 with “George White’s Scandals” starring Alice Faye. Seating 1,000 in stalls and circle levels, the Medina Cinema had a fully equipped stage, which was well used. It also had a restaurant, located on the first floor. By 1954 it was operated by the Southern Cinemas Ltd. chain

It was divided into two spaces in 1966, with the former circle remaining as a cinema, and the former stalls became a bingo club. Taken over by the Leeds based Star Cinemas chain in October 1965, they renamed the cinema Studio 1. It was taken over by the Cannon Group in the mid-1980’s and it was re-named Cannon. The bingo club was closed in 1987.

Taken over by the Picturedrome chain of cinemas on 14th January 1994, it was re-named Picturedrome. The cinema was divided into two screens, one seating 577, the other 299.

The Picturedrome was closed on the 17th February 2000 when the new Cineworld multiplex opened. The final films screened were “House on Haunted Hill” and “American Beauty”. Work began in late-2001 to convert the former stalls (bingo) area into a Yates’s Wine Lodge pub. The upstairs screens were closed in late-2013.

According to the caption accompanying this photo, the cinema was later known as the Studio after the stalls became a bingo hall.

Have load an early Picture of the Theatre

The Cannon Group didn’t take over this, and all the remaining Island cinemas until the mid 80’s. The bingo finished here in 1987 during Cannon’s ownership.It remained the Picturedrome up until it’s closure on the 17th Feb 2000 with the final films being “House on haunted hill” and “American beauty”