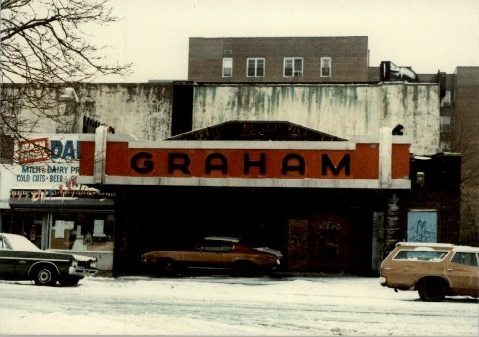 The Graham Theater was a one-level neighborhood house that was unique in that its projector booth was at the back of the inner lobby and had a nearly thousand-foot throw to the screen. The image was usually diffused by the light of the lobby and its candy stand. There was little separation between the theater and the lobby so you could see everything that went on outside.

The theater was a last-run house which screened double features, with shows changing twice a week.

The theater closed in the late-1960’s, was sold and renovated to become one of the first dollar theaters in Brooklyn. It became an instant success, and eventually raised its prices and showed some first-run fare like "The Exorcist".

A fire forced its closing in the early-1980’s, and the building laid dormant for years, until a developer bought it, and it was repurposed into condominiums. The condo development has the exact same shape of the old theater and bears the Graham name.

One more story: During that final walk-through before we sold the Graham, I found a lot of 35mm film that had been strewn about the lobby from the projection booth above. I suspect that it was the print of the last film ever shown at the Graham, “10” starring Bo Derek.

Hi Jim H,
My brother and I have wonderful memories of the Graham.
If you have any photos, we’d really appreciate it.

Thanks for the good thoughts. We’ll keep searching for those photos.

ahhh- the Graham! my neighborhood cinema; I lived in the nearby projects on W and Batchelder and nearly EVERY saturday of my childhood was spent in that darkened palace for the matinees (only $.35, later $.50). Mom used to give us $1.00 for the show, and there was enough left over to buy a sugar daddy, hot dog and soda and then go buy a comic book at the corner store on knapp and ave X on the way home. my favorite schedules always seemed to include Abbot & Costello films as part of the double feature, which began with the great B&W screener for “previews of Coming Attraction” loads of cartoons (usually Merrie Melodies) and then two films; an afternoon of pleasure, enter at 12 or 1230 and home in time for dinner by 530! my friends and I used to “tightwalk” the railing at the adjacent driveway; sometimes, we’d sneak someone in but often got nailed by the stern Matrons in their blue and white uniforms as they flashed the torchlights looking for those who opened the exit doors to allow “interlopers” to steal in without paying. I saw “the thing from another world” there at the age of 7 and it gave me nightmares for weeks thereafter; (it’s one of my favorite sci-fi films to this day). in fact, many of my favorite films today are the result of the education garnered from drowsy afternoons at the Graham, the Tarzan double features, musicals, westerns (that I took my grandfather to see – he loved “cowboy and indian movies”). Though we had a plethora of Century owned theaters in sheepshead bay, such as the Marine, Nostrand, Sheepshead, Brook, Mayfair et al, the Graham was our neighborhood palace- not ornate in any way, mind you, but a few short walking blocks from home. it was also where I took my first “date” at the age of 9 – the twins, maureen and madeline to see Oklahoma! My dream as a child was to grow up and buy the Graham, turn it into my own bijou and show the films I wanted to see and share with other patrons. When I travel back to the old neighborhood, I always drive by, and park in front of the sad looking condos that replaced my childhood pleasure palace and reminisce. God Bless that old movie house, and thanks for the memories!

foud advistment for the movie house from the 1940"s

trying to find pictures of the place

I saw Day of the Triffids (1963)there on a double bill with Village of the Damned. So I was 8 or 9 years old. Jeesh. We would knock the letters off the marquis and spell out our names in our bedrooms. We would drop a smoke bomb into the ticket taker’s booth and when it filled with smoke, run in the theater. I remember seeing the old Batman serials there and The Prime of Miss Jean Brodie (1969) so then I was 14. Also Planet of the Apes. I lived on Knapp Street and went to PS 194. Played in Bedford Bay Little League. Ha!

hope all habitual visitors and moviegoers like the picture I posted – I took it back in the 80s (?)

The building was actually not razed but rather it was re-purposed.