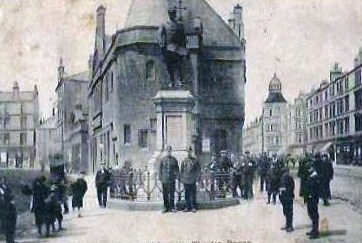 Located in the Govan district of Glasgow. The Lyceum Theatre of Varieties was opened on 4th November 1899 and was designed by architect David Barclay in an Italian Renaissance style. Seating was provided in orchestra stalls, dress circle and gallery levels. It was built as a music hall, and from 1902, films were part of the programme.

After a renovation in 1923, it was converted into a full time cinema. It was taken over by A.B. King in the late-1920’s. The Lyceum Theatre was totally refurbished in 1932 to the plans of architect Charles J. McNair. The cinema now had a single balcony and a new proscenium.

The Lyceum Theatre was destroyed by a fire on 23rd October 1937. In its place was built the Lyceum Cinema, which opened in December 1938 (which has its own page on Cinema Treasures).

This webpage has a picture of the Lyceum Theatre and some additional information.