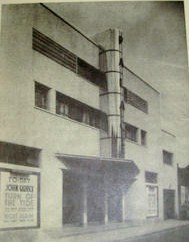 The front of the building and half the auditorium were demolished, and plans were proposed to extend the screen end at at later date to create a 1,000-seat cinema (this never happened). The new part of the building and the interior were designed by Nottingham based architect Reginald W.G. Cooper in a Streamline Modern style. Seating was provided for 700 in stalls and circle levels.

The Palace Cinema opened on 2nd September 1935 with Laurel & Hardy in “Babes in Toyland” and Leslie Fuller in “Strictly Illegal”. The cinema was equipped with a Western Electric sound system.

The Palace Cinema was closed on 20th February 1960 with John Gregson in “S.O.S. Pacific”, and was soon demolished to be replaced by a branch of Burton’s clothing store and a supermarket which by 2018 was a branch of W.H. Smith, a Post Oddice and a Vodaphone store.

This webpage has several photos of the Palace, interior and exterior.