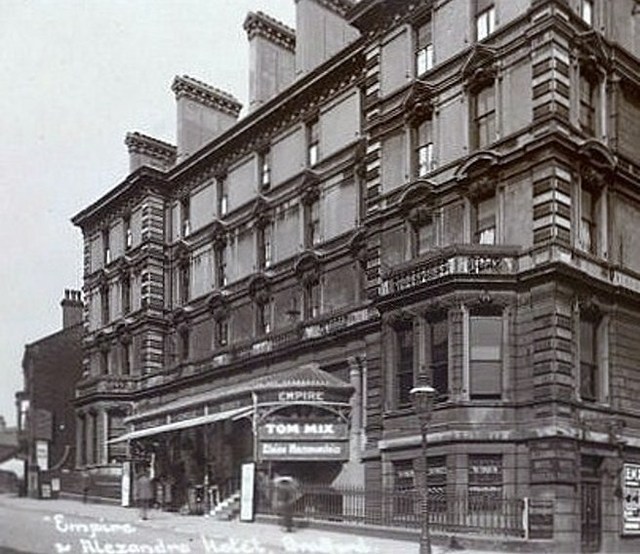 The Royal Alexandra Hotel was built and opened in 1877 and was designed by local architect Andrews & Pepper. The Empire Music Hall opened on 30th January 1899 and was constructed on a lawn behind the Royal Alexandra Hotel to the plans of W.J. Sprague. The theatre was entered through the hotel’s entrance and by walking through a pillared foyer, later remodeled as a palm court.

The theatre originally seated 1,381 and seating was in stalls, a horseshoe circle, a steeply-stepped gallery, and in side boxes. The elaborately designed ceiling consisted of elongated stepped hexagonal panels surrounding a small dome. The proscenium was 40 feet wide and the stage 40 feet deep, with dressing rooms and a flytower.

From its opening the Empire Music Hall featured variety and vaudeville acts and a number of famous performers including Charlie Chaplin, Stan Laurel, W.C. Fields, and Harry Houdini.

Competition from the Francis Laidler’s newer Alhambra Theatre across the road eventually caused the Empire Music Hall to close in April, 1916 only to be reopened about four months later by Laidler himself who renamed it the Empire Theatre & Opera House intending to use it primarily as a playhouse. However after about a year and a half of this programming, a fire in 1917 destroyed the stage area.

The theatre reopened on 11th February 1918 as the Empire Cinema operated by the Moss Empires Ltd. theatre chain, the first film shown was 1910’s “Sweetheart of the Doomed” with Louis Glaum. After 1919, the cinema changed operators a number times, and was advertised as the Empire Super Cinema, operated by the Biocolour circuit. The Gaumont British Theatres chain took control in March 1927; however, the more more prestigious films played at Gaumont’s New Victoria Cinema down the road. Sound was installed in 1930.

On 25th January, 1952 after showings of “Canyon Pass” starring Dennis Morgan, Patricia Neal and Steve Cochran and “You’re in the Army Now!” starring Jimmy Durante, Phil Silvers, and Jayne Wyman, a fire broke out in the gallery and broke through the roof. Although the management advertised that the cinema would reopen, it never did.

The palm court was re-fashioned into a dining area, and the front stalls entrance served later as a cocktail lounge, but the cinema sat basically abandoned. The hotel was later annexed by Bradford College in 1972, but the cinema’s auditorium was demolished in the 1980’s. The former Alexandra Hotel was torn down in 1993, and the site is now a car park.