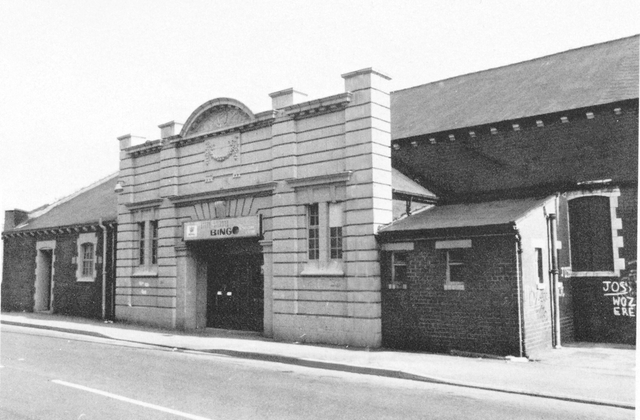 The Cross Lane Picture House opened on 28th September 1914 with “The Scales of Justice”. It has an attractive stone facade, and the auditorium is parallel to Cross Lane. The proscenium was 21 feet wide, and there were two dressing rooms.

It was re-named Plaza Cinema in 1933. The Plaza Cinema was later taken over by the Star Cinemas chain, based in Leeds, and was closed on 20th March 1963 with Ray Milland in “The Premature Burial”.

A really nice local cinema. I used to go on Saturday mornings, built of red brick, with a small entrance foyer. Nice and comfortabe, with double seats at the back, which were popular with young courting couples.

There is additional information about this theatre on this webpage.

The façade isn’t stone. The walls behind the projection room and along the exposed auditorium flank are of red brick (unusual for 1914 Bradford) with white faïence details to door and window lintels, etc; the (now decapitated) entrance feature is white faïence, and the rear of the stage is of Bradford sandstone. I recall the roof originally being slate, but could be wrong.

The mid-1950s cinemascope screen was within a rectangular box proscenium erected in front of the (now exposed) classical proscenium. It extended between the two corners at which the wall steps back to form recesses for exits. The new tabs were pale bluey/green. Those in the original proscenium were, in early 1950s, red with three horizontal gold stripes towards the bottom. Later in the 50s the auditorium was redecorated and new ceiling lamps fitted (giving a rather stark light); and splayed boards were inserted between the side corners of the new proscenium and the side walls, with gaps beneath for access to the exits.

UPDATE – The Joshua Project closed in September 2016. I am not aware of any plans being announced for the building.