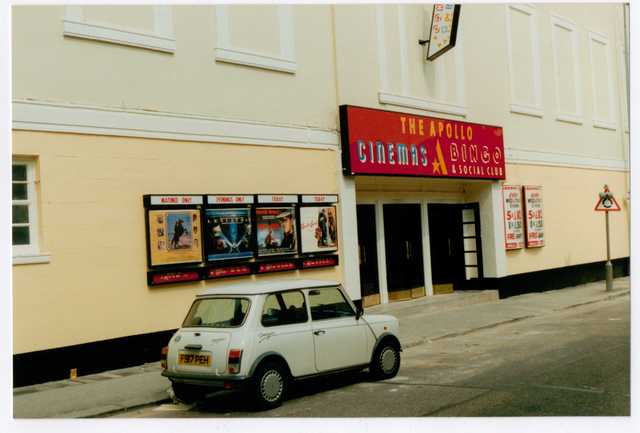 The Queen’s Hall was opened on 29th December 1910. Seating was provided for 700. It was equipped with a Western Electric sound system in January 1930 and was re-named New Queen’s Cinema with a screening of “Showboat”. It was taken over by the J.F. Emery Circuit in 1931 and closed on 27th May 1933 to be demolished.

The new Plaza Cinema was built on an adjoining site. It opened on 11th November 1933 with Clive Brook in “Cavalcade”. Seating was provided for 1,400 in stalls and circle levels. There was a cafe for the convenience of its patrons.

In 1954, the Plaza Cinema became the first in Crewe to be fitted with CinemaScope, opening with Richard Burton in “The Robe”. The screen was 40 feet wide. On 12th December 1955 it was taken over by the Rank Organisation and was re-named Gaumont. The Gaumont was closed on 12th August 1961 with James Stewart in “Two Rode Together” and “A Question of Suspense”.

It was converted into the Majestic Ballroom, it was converted into a Top Rank Bingo Club from 8th August 1965. By 1971, it had been sold to the Hutchinson bingo group. Upon the death of Mr. A. Hutchinson, the company was sold to Apollo Leisure who converted the former circle and circle foyer into a 3-screen cinema, now known as the Apollo Cinema, with bingo continuing in the former stalls. The original Plaza Cinema projection box was used for the two 100-seat screens in the former circle. The 93-seat cinema in the former café/circle foyer had its own projection box. The opening films on 24th May 1990 were “Uncle Buck”, “King of the Wind” and “Leviathan”. The Apollo Cinema was closed on 1st December 2005.

There were plans of turning the building into an entertainment centre in late-2006 and it became a concert venue known as the M Club operating in the former stalls/bingo club area. That closed in 2010 and the building stands unused after being purchased by Sainsbury’s Supermarkets, who have plans to demolish and build a new supermarket. Still standing empty in October 2013.

The stalls area became a live concert venue called the M Club. The cinema originally had a full stage with a notably high fly tower. The plans were to replace with a Sainsbury’s store.

The M Club was thoroughly explored by Spirit Cheshire (Psychic Investigators) who gave a full and accurate description of each floor and took many photos. Their visit is also on You Tube. I will be surprised if Sainsburys go ahead, knowing non events elsewhere.

I was chief projectionist here from 1999 to 2005 and would just like to make a minor correction; The third small screen in the old cafe/circle foyer had it`s own small projection box. The original projection box was only used for the two larger screens.

Thanks for updating description