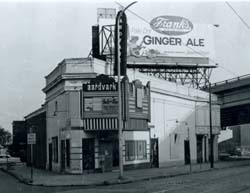 The Cayuga Theatre opened in 1915. It was the first theatre to be designed by architect David Supowitz.

The Cayuga Theatre was closed in 1955.

A section about the Cayuga Theatre on this web page gives the theater’s opening year as 1911. It also says the house was renamed the Aardvark Theatre in the early 1950s. After closing in 1955, the building as a church for some time, and was eventually demolished to make way for expansion of the Roosevelt Expressway.