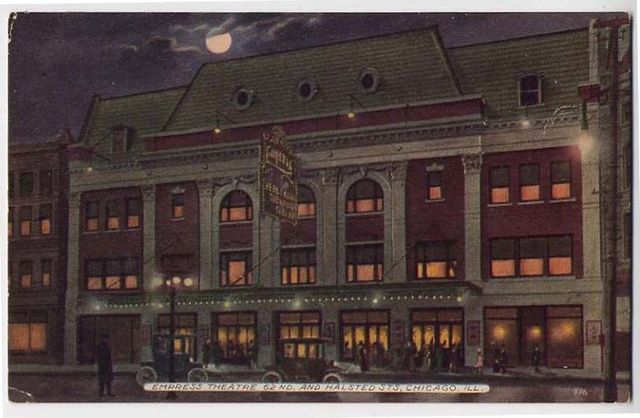 The Empress Theatre opened in 1913, located in the Englewood neighborhood of Chicago, one of a handful of theatres in the South Halsted Street and 63rd Street business district, including the Englewood Theatre, National (Ace) Theatre and Stratford Theatre. The architect was J.E.O. Pridmore with George Lesley Rapp of architectural firm Rapp & Rapp.

Originally a legitimate theatre, it later turned to vaudeville and finally switched over to movies by the 1920’s, and it would remain a movie house until closing in the 1970’s.

Don’t know quite what to make of this one:

From the front page of the January 30, 1911 edition of the Englewood Economist (precursor to the Southtown Economist),there are three short blurbs regarding upcoming acts at local theaters. They list three: the Linden, the Marlowe (63d/Stewart), and the Empress. The first graf reads:

“The master ventriloquist, "Trovello,” is bringing to the Empress (formerly Trevett) theater next week a spectacular scenic ventriloquist novelty entitled “The Little Chauffer at the Boston Road Inn,” which will eclipse any production of this kind ever seen in vaudeville… . “ It then further describes Trovello.

My question is: What was this Trevett (theater) that was around two years before the Empress opened?

There is also a news brief of the same newspaper but from June 1907 that headlines: “Vaudette Still Open” Under that, in parentheses it reads: “Sixty-third street near Halsted)” It goes to describe the bill at the theater. Never heard of this one either. Anybody? Bryan? I’m very curious. If I find out anything else, I’ll post it.

The address is inconsistent. Besides the various street numbers provided above, the 1960 yellow pages listed the Empress at 6228 S. Halsted.

Here is a March 1923 ad from the Suburbanite Economist:
http://tinyurl.com/ofc22h

The ad is Page 5 from the Friday, March 9, 1923 edition of the Englewood Times, a forerunner to the Southtown Economist. Also on that page you would have seen the columns that were written for the Englewood Theater and the Empress Theatre. In the column on the former you’d have seen a notice about the upcoming vaudeville bill. It would’ve included a mention of the comedy team of Billy Frawley and his wife Edna Louise. Billy Frawley would later become known as character actor William Frawley, who played Fred Mertz on the I Love Lucy show some 30 years later.

George L. Rapp may have helped design the Empress. http://archive.org/stream/movingpicturewor16movi#page/66/mode/2up

Englewood and Broan, I was forwarded a postcard image of the Vaudette Theatre on 63rd near Halsted as mentioned above. It may have been vaudeville only however and did not show films. As the promotions above the entrance do not come back as film titles. CinemaTour doesn’t even have the other Vaudette on 92nd Street, so no help there. If the 63rd Street Vaudette is proven to have had films, I will set up a page for it.

Great thanks! I will set up a page for it. That gives the address, though before the latter 1911 Street Renumbering after the Loop in 1909. And the Chicago History Museum has cut off access to the 1911 pdf, but we’ll go with what we have for now.

Three was a new operator for the Empress Theatre in 1923, noted in this item from the September 8 issue of Moving Picture World:

“The Empress Theatre at 6230 South Halsted street has been leased by the Acme Amusement Company, who will open early in September with mixed bills. The house seats 540 and is in the heart of Englewood district.”

I’m not sure what “mixed bills” means– perhaps movies with a few vaudeville acts. But I don’t know why the magazine gave such a low seating capacity for this fairly large house.