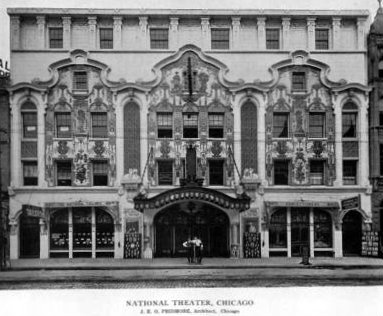 Originally opened in 1904 as a vaudeville theatre known as the Avenue Theatre and this continued until 1906. From 1908 it was converted into a movie theatre and was re-named National Theatre. It was located in the Englewood neighborhood, on S. Halsted Street between West 63rd Street and Peoria Drive. When it first opened, it seated over 1,100 (later reduced). It closed around the early-1930’s.

In 1935, it reopened after a Streamline Moderne remodel, as the Ace Theatre. In 1950 the theatre underwent another name change, as the Kim Theatre. The Kim Theatre remained in operation until 1966. It was renamed Kim Art Theatre from March 2, 1966 and screened adult movies. The theater has since been demolished.

“ … Englewood’s National Theater at 6217-23 South Halsted street, home of Chicago’s oldest stock company, which has been giving a weekly change of bill for the last thirteen years, was sold yesterday for $160,000. Harry O. Rabe and James F. Sutter of Rabe, Sutter & Co., printers, bought it from the Englewood Stock company, of which Louis Rathje is president. The playhouse was designed by J.E.O. Pridmore and seats 1,200 … ”

This story from the Trib might explain this theater’s first name change. (Monday, November 19, 1906)

A whirlwind automobile ride which violated every speed ordinance in the Chicago code, smashed any number of records, and brought Fire Marshall Horan from the foot of Chicago avenue to Sixty-third and Halsted streets in nineteen minutes, made an early morning fire which destroyed the Avenue Theater yesterday a memorable one for the new chief.

The fire was discovered shortly after 5 o'clock, in the three-storey frame structure which houses the stage of the theater. In an incredibly short time, the light building had become a furnace, the heat of the fire breaking windows in flats and stores for nearly a block in Halsted street and Englewood avenue. Within less than half an hour, the structure and its contents, which were valued at $20,000, were destroyed. No one was hurt.

Just before the [illegible and unreadable] Assistant Marshall Burroughs, Marshall Kenyon and ten firemen had a narrow escape from injury when the roof and walls of the stage structure fell in. The adjoining building, at 6235 Halsted street, which was occupied by the Clifford Bros.‘ saloon, was partly destroyed.

The building was owned by John, Michael, and Henry Clifford. The theater was leased to Samuel Morris, owner of the Avenue Stock Company. His wardrobe was entirely destroyed.

Crossed wires on the stage are believed to have caused the fire. The theater, it is said, will be replaced at once by a modern steel structure having a seating capacity of 2,500.

Wow the memories these brought back.In the early 50s as a recently diccharged transplant from Tennessee,[hillbilly], I lived at 6528 Harvard. I remember the pulse and excitement of 63rd & Halsted, Sears, Kresges, and the Southtown. We rode a Penn. RR comuter train from Englewood Station to the Union Station downtown to work, Took 15 min. each way, and a months pass cost 20 bucks if I remember right.We lived there and 62nd & Richmond until 1960, then moved to Maywood. We left the area in 71, havent been back since. I couldn`t believe it when I Googled up 63rd &Halsted and found it was gone. Impossible!!!!
tullahoma
Halsted and found it was gone.

“City Sued for Denying
License to S. Side Movie

“Strand Art Theaters, Inc., filed suit yesterday in Circuit court against Mayor Daley and the city of Chicago contesting the city’s denial of a 1967 license for the Kim Art theater, 6217 Halsted st.”

Here is a March 1915 ad from the Suburbanite Economist:
http://tinyurl.com/lgjy4l

In the early 1940"s i seen for the first time BAMBI at the kim.I was 8 or 9 yrs old .boy i loved all those theaters those days.We moved to phx az in 1951 and the whole city had only 5 theatres.Damn time goes by fast when u get old.I lived in the big 4 story building at 504 w 62st across from the kelly library.

Modernization of the new Kim is first in a series of scheduled improvements in the W. 63rd and S. Halsted sts. area. There are all new seats throughout, a new marquee and doors, enlarged lobby, new lounges and complete redecoration.
Bruce Trinz, general manager of the Clark theatre, heads up the management of the Kim.
Formerly known as the National Theatre, Englewood’s well known theatre opened its doors in 1908 as a headquarters for stock company shows and vaudeville. It was converted to a movie house in 1930.

For some reason, Broan’s link in the previous comment now fetches a photo of the interior of the Juneau Theatre in Milwaukee. Here is a link that should get the photo of the National.

Here is an item about this theater from the March 4, 1922, issue of The Economist, a regional weekly business magazine published in Chicago:

“The National Theater at 6217 to 6223 South Halsted street, 79x124, has been purchased by Harry O. Rabe and James F. Sutter of the Printing firm of Rabe, Sutter & Co., from the Englewood Stock Company, of which Louis Rathje is president, for an indicated $160,000. In addition to the 1,200-seat theater the building contains stores and 17 offices. The National Theater & Amusement Company has the theater leased for a term having seven and one-half years yet to run.”

Linkrot repair: The 1911 photo of the National Theatre is now at this link.