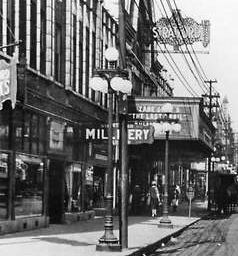 Opened on September 4, 1920, in the heart of the-then bustling Englewood business district, the Stratford Theater was a large theater which presented vaudeville acts as well as movies for its first couple of decades.

Built for the Cooney Brothers circuit, the Stratford Theater was operated by Warner Brothers from the 1930’s into the 1950’s.

With the 1931 opening of the palatial and even larger Southtown Theatre just up 63rd Street, the Stratford Theater’s popularity started to wane.

The Stratford Theater has since been torn down.

Wow…walkin' around with almost 5 G’s in cash in 1927? With a cop, and still getting robbed? Sounds like Mr. Hogan got set-up.

Too bad the Stratford Theater building couldn’t have hung on long enough to be appreciated more as a neighborhood landmark. And restored to it’s former glory. The Bob Hope history alone should have prevented it’s fate.

I live in phx az now but when i was a kid i went to the southtown,linden,ace STRATFORD,linden all the theatres were great.I once seen DICK CONTINO and him playing the accordian at the stratford.Plus i seen ROY ROGERS AND DALE EVANS THERE IN 1950.I am 69 yrs old and i had some good memories there.I lived at 504 w 62nd st across from the libraryI moved in 1952. the doberman

I just bought a Nostalgia Magazine with Bob Hope on the cover. This triggered memories for me. My mother took me to see Bob Hope at the Stratford Theatre. We also saw Abbott and Costello there, who did their hospital sketch. I wish I knew what year this happened.

Jan did you go to lewis-chapman grade school?I went there kindergarden thru grade 7B remember in those days they had grades a and b?I practically lived at 63 and halstead.All ways went with my mother to 3 sisters restaurant at normal and 63st.john(jack)I seen BAMBI at the ACE theater when it was a new movie i think it was new.In the late 40s.

We shopped occasionally at 63rd & Halstead. I went to Sawyer Ave. School and Gage Park High.

All i did was shop at 63st and halstead and down town at the loop.I am probly a lot older than you but i eather took the streetcar down town or EL and with $1.00 i went to the CHICAGO THEATRE AND TO A wimpys hamburger stand and then to the STATE AND LAKE theatre and home again.Then gave my grandmother the change back.This was 1949,50,51,DAMN i never knew i could get so old.I just retired as a truck driver 9 mths ago.But i sure remember those good theatres.PHOENIX AZ only had 6 theatres in the whole damn city then.JOHN

To: thedoberman and Jan Fricke

Thedoberman,
The restaurant at 63rd and Normal Blvd. was called the Lauer Sisters Restaurant. BTW, just after the turn of the 20th century, the original Englewood Theater stood where Lauer Sisters would later have their place.

Jan,
I wrote an article for Nostalgia Digest (Summer Issue, 2008) about Bob Hope and how he got his real start at the Stratford Theater. The year, I believe was 1928 or 1929. The name of the magazine is Nostalgia DIGEST, not Magazine. They are two different publications.

Here is a 1921 view of the Stratford and Englewood.

Sitting by the Swan Pool at the Southtown is one of my most wonderful memories as a kid…..what a theatre. I was able to see 3 double features a day at all the movie houses around 63rd and Halstead when I spent summers at my grandparents and while they were at work. I’m still looking for a good foto of the lobby of the Southtown. Great memories.