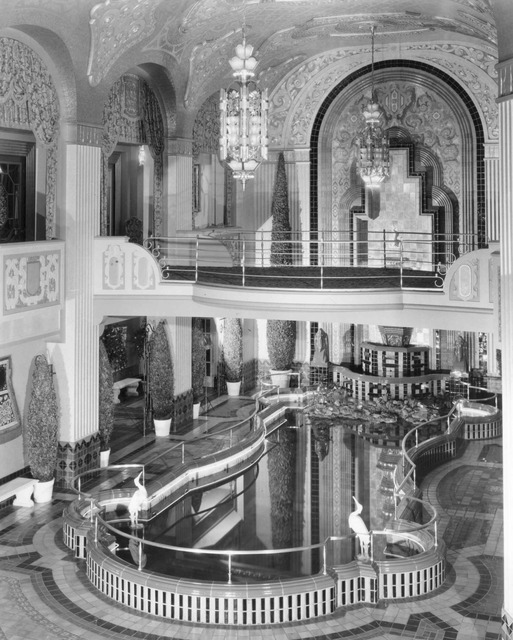 As the Depression set in, the Southtown Theatre would be the last massive picture palace to be built in Chicago. It was located on W. 63rd Street to the west of S. Wallace Avenue and was built and operated by the Publix-Balaban & Katz theatre chain.

The theatre was designed by architectural firm Rapp & Rapp and opened December 25, 1931 with Will Rogers in “Ambassador Bill” and Gary Cooper in “His Woman”. There were 2,201 seats on the main floor and another 1,000 in the balcony. The most incredible feature was the Flamingo Pool and fountain in the Grand Lobby which had a waterfall and live fish!

The floor plan of the theatre reveals a twin box office set up, a grand lobby, a grand inner lobby (site of the pool), a children’s playing room, a women’s lounge, a men’s lounge, an exit lobby, grand stairs to the lobby leading to a grand foyer, a huge auditorium plus a gently raked balcony.

There were dioramas on the mezzanine foyer which depicted well known Chicago historical events like the Great Fire of 1871. The 4/20 Wurlitzer organ was not original to the Southtown Theatre. It was moved there from the Congress Theatre in 1931 and was used only for a few years and then mostly neglected. It was left to deteriorate and ended up a casualty to a leaking roof.

The Southtown Theatre finally closed in August 1958. It was demolished in 1991 after serving for many years as Carr’s department store and after that, a flea market. An interesting note–two plaster musician busts from the Southtown ended up in the restored Lake Theatre in Oak Park, IL.

My husband and I salvaged a few chunks of cast terra cotta from the demolition site. I think I was going to a co-worker’s shower out on the South side – must have been the same summer as the demo – and DH (bin diver that he is) drove by and scrounged whatever he could. My mom and dad used to go there; she always told me how beautiful it was. I hope this site stays alive – I found it through a search for the Peoples theater (47th & Ashland) where we went as kids in the ‘50s. My girlfriend and I would walk from 55th and Hermitage to the movies on Saturday – 25c for under twelve.

I was taken there as a child in the mid 1950’s to see Disney films. We lived at 59th and Lowe so we just walked there.

I recall the ponds inside with ducks swimming in them.

My father, Joe talked about this Theatre, and The Capital. He loved them, and lived in Englewood as a little boy in the 30’s and 40’s, near 71st and Lowe. Thank you so much for posting this. I also loved reading the comments. I had tried to remember the names of the theatres, but then found them in a school report I wrote on my dad about 25 years ago. I recorded his description of the fountains and statues that the pictures show, and the comments describe. Thank you again, this means a lot to me.

Any pics of the auditorium? Great art deco tower and signage.

Click on “Photos” at the top. 3rd photo in is of the auditorium.

I Believe thet the Southtown was the only one of the great movie palaces that stood free of surounding buildngs in its parking lot which may also have been unique. You could also see the immense size of the building and not just a facade.

The sleek lies of the lobby were a contrast to the sometimes over ornate lobbies of other theaters. The swans in the lobby wwere probably the most elegant touch

Years later I wnet to the Carr Store in the theater but the sight was so despressing that I never went there again.

It pains me to learn that theaters as beautiful as this, were demolished. Makes me hope even more that south side theaters such as the New Regal(aka Avalon), do reopen. At least that theater was in decent condition, when I visited it a few years ago during Open House Chicago.

The Three Stooges performed there for 1 week starting February 14, 1936.