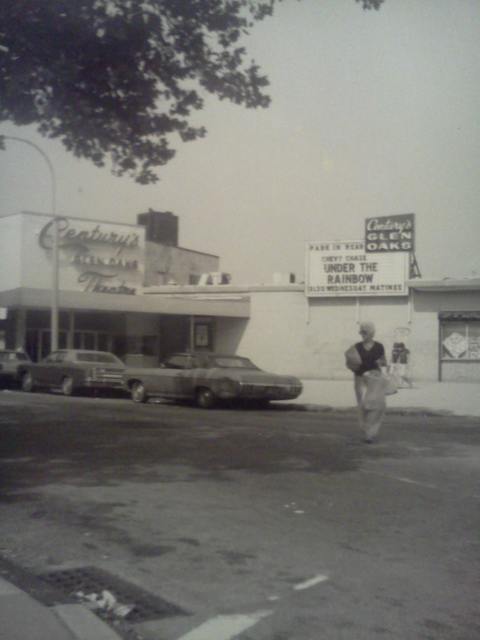 The small Glen Oaks Theater stood on Union Turnpike in eastern Queens. It was a long one-level theater that anchored an outdoor shopping center. At some time during Century’s wholesale closing of its theaters, this one was shuttered, and it rose from the ashes as a drug store.

The Diaz brothers also owned and operated the “Ridgewood Theatre” I don’t know how I could forget that theatre. A group is NOW trying to get Landmark Status for this theatre because it’s architect was Thomas Lamb (he designed some of the most spectacular theatres in the U.S.

Right, all under the ownership of the Diaz brothers.

I started at the Meadows as an usher for Mr. Decatsky in 1972. Went to the Glen Oaks for Mr. Twin and to the Prospect as Mr. D’s assistant manager. They made me a relief Asst so I wound up in Bynum and Nassau during the week and back at the Prospect in Flushing. I learned a lot from Mr. D. and eventually went into the Navy.

CenturyBill do you have any Century memorabilia? I remember they used to print a movie guide. Wonder what ever happened to the comedy and tragedy masks at the Glen Oaks.

CenturyBill, an after thought. what was the seating capacity at the Glen Oaks?

“robboehm CenturyBill, an after thought. what was the seating capacity at the Glen Oaks?”

I’m not sure of the exact number of seats, but, I know it was OVER 600 seats (most small neighborhood theatres had 600 seats or less)because of the pay scale in the union contract. When the Glen Oaks opened they were still using the number of seats as a factor in determining the pay rate. Compared to other neighborhood theatres, like the Utopia Theatre, the Glen Oaks wasn’t as “small” as the “overview” above would have you believe. It was over 600 seats, but less than 800.

It was under 800, I don’t remember exactly. Only things I have are some movie stills from On Her Majesty’s Secret Service and my original nameplate. I do remember when it became an evening house the Teamsters were trying to unionize the managers and Mr. Tawfik was on strike. When I came to open the theatre someone had sliced the bottom of the screen and cut open the syrup containers. I used duct tape on the back of the screen. Fortunately it was an Xrated movie and no one was looking at feet!

I remember when the Teamsters tried to organize all the Century managers. The managers originally wanted to join Local 306 (projectionists), but the NLRB said that would be a conflict.

My permanent job was in Manhattan at Walter Reade’s DeMille Theatre. It burned down on 1973 and I waited for it to be reopened. When it re-opened under “New Management” I decided to leave. I decided to go to the Prospect. Because I’m losing my memory, I can’t remember whether Ed Burns was the manager before or after Mr. D. Unlike some other projectionists, I got along with and liked BOTH Ed and Bernie. Any projectionists that didn’t get along with them probably had trouble going their job, since that was the only reason that would caused any problems with either one of them, since normally they were real nice guys.

The Glen Oaks was an add-on to the existing shopping center, not part of the original; part of Century’s recognition of the potential of the vast area north of Jericho Turnpike. They also envisioned a stand alone theater on the north side of Hillside Avenue, west of the intersection with Braddock Avenue. I remember the large sign which announced this was the site of the newest link to the chain of Century Theaters. Never happened.