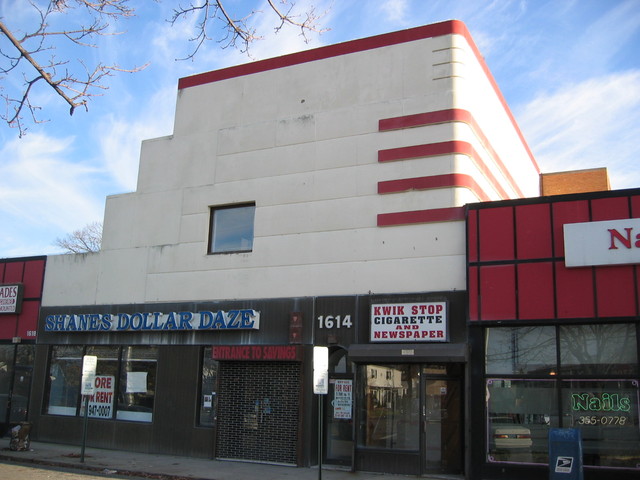 The Alan Theatre was opened May 15, 1947 with James Stewart in “It’s a Wonderful Life” & Lawrence Tierney in “Step by Step”. It was mostly named for the Century Theatres chain owner’s first name and was designed by Century’s Director of Purchasing & Maintainance, Leonard Satz. It had a small balcony and initially screened sub-run movies. It later showed showcase-level films.

Like most Century Theatres houses, it closed in the late-1970’s or early-1980’s and was converted to retail use.

Hey Ligg – why are you allowing the funny named guy Surendra Gupta to advertise his business on this site – it seems that he should consider some ad-space ? The 1614 Hillside was a great place – but its a dump now !

I am not responsible for the post on here. That guy came and advertised without my knowledge. I have to much going with my own life to complain to the webmaster here. If you feel his post is inappropriate, then you need to go to Cinema Treasures and tell them to delete it.

It always seemed to me that the Alan and Franklin had the same design albeit different facades. The Alan had no flashy marquee. The first time I went there I missed it. In later years they added a big signboard attached to the front of the theatre.

Anybody remember when they went single feature for a bit?

I worked in the Alan in the early 80’s, lots of great memories there. I remember when Valley Girls and Popeye played there. The manager at the time was Fred. He had that small office on the left side as you entered the theater. Sad to hear that there are no remnants of the theater left.

A pic of this as a theatre has not turned up yet?

Both the street view and the map for this theater are way off. The theater was (and building still is) just east of New Hyde Park Rd on Hillside Avenue. The zip code should be corrected to 11040 (not 11004) and the street view re-set so it may be corrected.

Agree with TInseltoes. And the street view and map location are still way off, despite the corrected zip code. The photo I uploaded clearly shows the address of the theater was/is 1614 Hillside Avenue. Not sure what else is needed to get the map corrected. In the meanwhile, please re-set the street view so it might be updated for a proper view.

Growing up in North New Hyde Park in the fifties and sixties, I went to the Alan Theater many times. Generally we took our bikes to their Saturday matinees. Cowboy movies, comedies, science fiction. I definitely remember seeing “This Island Earth” there. Losing community theaters such as this one has made our society all the poorer for it.

Thought of this theater, googled it and found myself here.

This was the theater I saw Star Wars in, back in ‘78 I think they re-released it a year later (this was pre-VCR days for the most part). A few years later I saw Raiders of the Lost Ark there.

I am pretty sure it was replaced by a “Consumers Showroom” outlet in the late 1980’s (https://en.wikipedia.org/wiki/Consumers_Distributing)

Century’s Alan had its grand opening on the night of May 15th, 1947. Newspaper advertising neglected to mention the program, but an earlier report claimed “It’s a Wonderful Life” and “Step By Step,” both then in wide sub-run engagements.