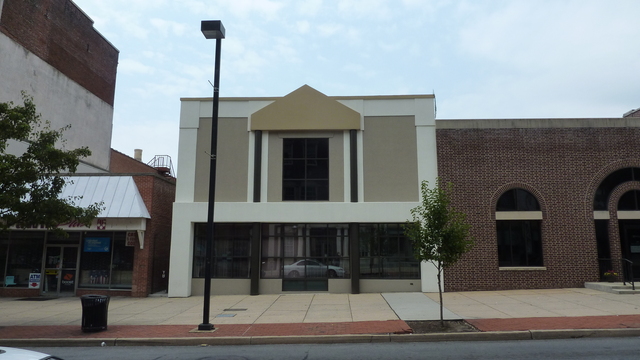 Originally opened as the Hippodrome Theatre on September 1, 1913 and was screening movies by 1926. By 1931 it had been renamed Rialto Theatre, and closed June 17, 1952 with Carl Esmond in “The Catman of Paris” & Robert Livingstone in “Valley of the Zombies”.

This was the Hippodrome prior to the Rialto. It opened as a Vaudeville theatre and converted to movies sometime in the the teens or early 20’s.

I didn’t know the old Hippodrome and the Rialto were one and the same. The Rialto was one of the theaters Warners Bros. operated in York (along with the Strand, Capitol and the Ritz, and the Lion in Red Lion). The Ritz showed Westerns, I’ve been told, and the Rialto was what was called an “Action House,” specializing in low-budget detective, mystery and horror movies and whatnot. The Strand and capitol were the Warner’s prestige theaters. The Rialto closed sometime in the 1950s when those kind of movies dried up.

Now here’s an interesting story and I’ve always wondered if it was true. When the Rialto closed a finance company took up residence in the lobby, and a false wall was constructed between the lobby and the former auditorium. I’ve heard that as recently as the 1990s, you could open a door and walk into the Rialto’s auditorium, frozen in time as it had been when the theater closed. I think by now the entire building has been taken over for bank offices, but who knows if any of the Rialto still exists.

Thanks for the info John. I wonder who owns the building? I might venture down some afternoon and see if I can get in.

Triumphal arch entrances had gone out of style by the 1920s, so the Hippodrome probably dated from the 1910s. The house was definitely in operation by 1923, when management came up with this stunt to publicize the Harold Lloyd comedy Safety Last.

Used to watch the 101 Ranch Boys perform on the stage of the Rialto on Saturday afternoon.

The Hippodrome Theatre was listed in the 1914-1915 American Motion Picture Directory. There were ten movie theaters listed for York.