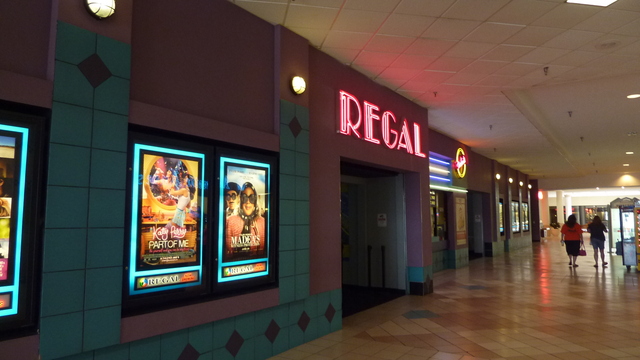 I know theater 1 is the biggest screen in the place. I think they get smaller as the numbers get higher. I just saw Brave with my daughter here last week in theater #12 and it was small.

It hasn’t been officially announced yet but this mall is coming down in February of 2013. Not sure what will happen to the theater yet.

They are likely to keep the theater. But in order to keep it in touch, they will have to upgrade (and/or renovate) it soon.

Guess what? They just opened an IMAX screen before the weekend. At Frank’s on S. Queen St. They said it’s a marvel.

The mall is being completely made over into an “open air mall” sometime in the near future. The theater will stay and will be having some renovations. (The largest theater actually got new seats at the start of last summer.) Hopefully, it’s a real IMAX they put in and not another fake one.

Frank Theaters stealing a good portion of their business has led to at least one good thing: they get a lot more indie stuff. It was the only place in York to see The Artist, Bully, Moonrise Kingdom, Celeste and Jesse Forever, Beasts of the Southern Wild, To Rome With Love, The Sessions, Quartet and various others. They also seem to be getting more Christian-aimed movies. Not really my thing, but I’m sure they do okay in the area.

While they’re renovating, I do hope they improve both the food and staff better.

BTW, the name of the theater is Regal Cinemas West Manchester 13, just to let everyone know.

I believe most of the renovations to the theater are now complete. They lost about 2/3 of the seating with the switch to the king-size recliners. The inside area in front of the theater is now the last remaining part of the old mall. The exterior also looks different as the marquee was taken down. All the changes are very nice, but Regal still insists on 20 minutes of previews.