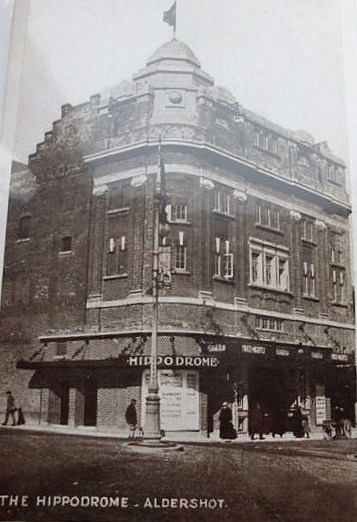 Located in the centre of Aldershot at the corner of Station Road and Birkett Road. The Hippodrome Theatre was opened on 3rd February 1913 with a variety bill. Seating was provided for 449 in the orchestra stalls, 258 in the dress circle, 272 in the balcony, and there were 4 boxes each seating four persons. The proscenium was 24 feet wide, and the stage 30 feet deep. There were seven dressing rooms. By March 1914 Kinemacolour films were being screened as part of the variety programme.

Occasional cinema shows were held in the theatre and by 1927 it was operated by Kingshot Syndicate Ltd. It was refurbished in 1931, and had a ‘Grand Re-Opening’ on 6th April 1931 with twice nightly cine-variety which included the screening of “Pathe Super Sound Gazette”.

The Hippodrome Theatre was closed in the mid-1950’s, and was demolished in 1962. An office & retail building known as Hippodrome House was built on the site.

I have an exterior shot. But there is a Tram in the way that ruins the shot

Mike. Never had trams in Aldershot, its probably an Aldershot & District Traction Co. (Traco) omnibus with external stairs to the top deck. Think I know the picture you mean though.

I have put the picture on. It is a bus showing a lack of timing :o) My eyesite is getting ….

@ ritzman.. I have loaded a better picture of the exterior without a bus getting in they way :o)

@ ritzman. Thats a Good and Bad picture of the demoilition.. If you see what I mean..

New photo added: closed and for sale but soon demolished 1960

New photo added of the auditorium, balcony, gallery (gods), side box and good view of the decorative plaster ceiling

View of auditorium prior to demolition 1960 uploaded