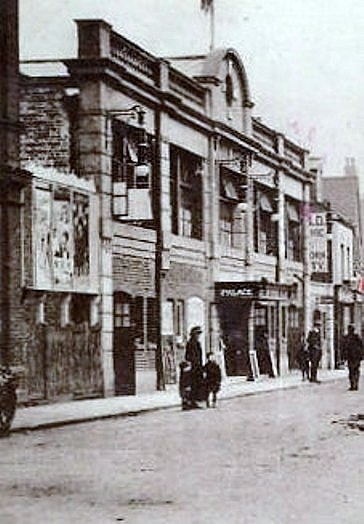 A small but intimate cinema designed by office of the Frank Matcham Co. It once had silk wall panels and gas lighting and was originally run by the Aldershot Picture Palace Co., a private independent company.

It was sold to local council in the 1970’s and screened pornographic films.

It then operated as a night club, originally named Cheeks and then VOX. In Spring of 2010, it re-opened as a live music and special events venue known as The Palace, but this closed in 2013. It was re-opened as a banquet hall and conference centre on 18th December 2015.

The former Palace Cinema was given a Grade II Listed building by English Heritage in 1979.

Thirty one customers to the Palace Cinema, in Aldershot, have fainted in four days this week during the screening of the film The Shocking World.

All were men and they collapsed after the scene in which a knife is apparently pushed through a man’s throat.

The film, a documentary in colour showing aspects of life and violence throughout the world, began its run on Sunday, and by the end of the evening 12 men had fainted.

One needed treatment at Farnham hospital and was detained until Monday, but the others were revived by the manager Mr AHJ Whittle and his staff, and either returned to see the last of the programme or went home.

Since then Mr Whittle has sought help from the St John Ambulance Brigade, which has had personnel on duty at the cinema.

Eight men passed out on Monday and another eight on Tuesday, but on Wednesday the number was reduced to three.

Mr Whittle told our reporter that he and his staff coped with the emergency and have laid in ample stocks of smelling salts.

The Palace has re-opened (December 18th 2015) as a banqueting and entertainment venue. It has been redecorated in a colour scheme similar to that when it was last used as a cinema. The balcony was divided off from the main auditorium by a drop wall when it was used as a music venue and night club. The drop wall has been retained and has large windows that allow sight of the former stalls area. The stage and proscenium are still in place. The new look interior is very pleasing to the eye and every effort has been made to preserve the original decorative scheme and plaster detailing.

The following link will allow you to see photos taken on the opening night and launch of the Palace as a banqueting venue http://www.gethampshire.co.uk/news/local-news/palace-aldershot-welcomes-guests-official-10628075

New photos added of the restored and redecorated former auditorium of the Palace cinema. The PALACE is now a wedding/conference facility.