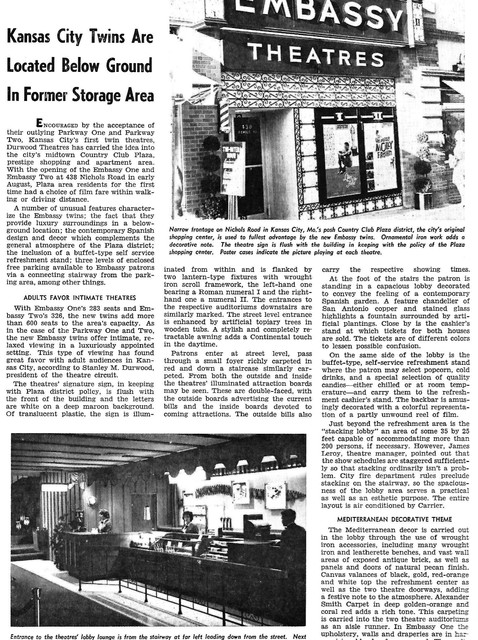 This location in the Country Club Plaza often had exclusive engagements. it opened August 11, 1964. I saw “A Clockwork Orange” there in August, 1972. It was closed on January 25, 1981 with Bo Derek in “A Change of Seasons” & Angela Lansbury in “The Mirror Crack’d”. I think it was located under a parking garage which may still be standing.

Normally, the same feature would play on both screens for the first month of the run, then a smaller picture would occupy the other screen. I think this theater was below a bowling alley, with only a small marquee and two door entrance at street level. I recall a fountain at the bottom of the staircase, and at least one of the theaters was about 16 seats wide and seemed to be 50 rows long.

The Embassy tended to play less-mainstream fare: “That Cold Day in the Park”, “Me Natalie”, “The Damned”, “The Devils”, “Popi”, “The Rain People”, etc. Sometime in the mid-70s, The Embassy started running bigger films, and did so until it closed.

Waited around the block to see The Exorcist at Embassy. Also went on my first real date there. Lots of great memories.

You mentioned The Exorcist….I’m pretty sure this video has a picture of The Embassy Theatre, CC Plaza 1973. The picture is at 1:30 into the video and only lasts 3 seconds so pause it to see it. https://www.youtube.com/watch?v=LSVHpX1CDN8

The AMC Embassy 2 departed on January 25, 1981 with Bo Derek in “A Change of Seasons” on Screen 1 and Angela Lansbury in “Mirror Crack’d” on Screen 2.