Palace on the Plaza 14 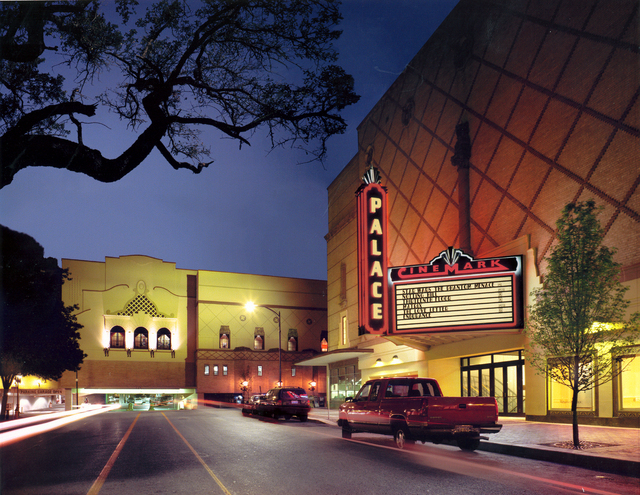 Located in the Plaza in Kansas City. Cinemark opened the Palace 14 in 1999 seating 2,800. The Palace 14 replaced the shuttered Plaza Theatre two blocks away. The theatre is equivilant to a three story building and takes up an entire city block. The exterior is beautiful with a spanish motif that blends with the other buildings in the Plaza. A really nice but small two sided marquee with a vertical that says PALACE at the front of the marquee.

It has a huge open lobby with chandeliers from the third floor ceiling. You reach the ticket counters as soon as you walk into the lobby and then a central concession stand in the middle. There are escalators on both sides of the lobby to take you to the upper level auditoriums. There are two satelite concessions stands on the upper level. The entire motif of the theatre is of Spanish style. Well lighted and very colorful. THX auditoriums, stadium seting, spacious aisles and Dolby in all auditoriums. It was closed on May 19, 2019 to be converted into a Nordstrom store.

Tour of Missouri, Oklahoma and Kansas Theatres in 2004
From June 26 through July 1, 2004 the Theatre Historical Society of America will tour a number of theatres in Kansas City Missouri and surrounding areas, including theatres in Lamar, Joplin, Richmond, St. Joseph and Springfield, MO, as well as Miami, OK, and these cities in Kansas: Leavenworth, Kansas City, Emporia, El Dorado, Augusta, Wichita, Hutchinson, McPherson, Salina, Concordia, and Topeka. More information is contained on their web site: http://www.HistoricTheatres.org and special photos and information concerning the Kansas City theatres: UPTOWN and the MIDLAND is available on this temporary page of their site at: http://www2.hawaii.edu/~angell/thsa/fromarch.html A glossy brochure about this “Heart of America” Conclave is available from the Society’s headquarters listed on their homepage, via E-mail to the Ex. Director, or via snail mail. Membership in the Society is not required to attend the Conclave and tour the theatres, but fees do apply as detailed on their site. Bring your camera and lots of film, for it is usually difficult or impossible to enter these theatres for photos, and some of them will surely not be with us in the years to come.

Even though it has Palace on the Plaza 14 in its name, it actually has 15 screens, because the VIP room issn’t counted in the 14.

While the theaters are impressive, they do not “take up an entire city block.” There are stores and a McDonald’s on the lower level. The southeast corner is taken up by the Brio Tuscan Grill restaurant. Also, several (five?) of the biggest auditoriums are located across a skybridge to an adjoining building (built over a parking garage). Truly one of the better multiplexes anywhere. This building was once a Sears.

The entire place, from the carpet to the walls could use a good scrubbing. And don’t get me started on the bathrooms. But it’s a block away from my apartment so naturally I will patronize the venue. Comfortable seats and good sized screens in the larger auditoriums. But the management really needs to pay more attention to the property and spiff up the place a bit. I’m surprised Highland Properties which manages the Plaza shopping district, hasn’t come down on Cinemark. Warren Theatres in Wichita is a really good chain. I wish Warren would come in and take over the Palace Cinemark.

I would agree with getting the Warren Theater Co. into the Palace and maybe even a few other theaters. They would fit right in with our wonderful local theater owners of the Eastland Theaters and the Fine Arts Theaters. The closest thing we have to a Warran Theater is the beautiful AMC Mainstreet which is a retored old movie palace. The outside of the building is one of the most beutiful in the entire city. Thanks AMC.

great theater, we take the kids down there alot….cheap prices on the weekends during the day. Noodles is now down below where the McDonalds used to be.

Apparently the Palace now occupies the space that was once the Seville Cinema (Seville Square 4) at 500 Nichols Road.

Actually, the Palace is not in the same space as the Seville Square 4, but it is in the same building. The building was evidently a Sears originally. I remember going there in the early 80s. It had been converted into a shopping mall, with dozens of very expensive boutique shops, mostly jewelry and clothing. It had four floors, plus basement, with a skybridge on the 2nd floor that took you over the street to and from the parking garage. The Seville 4 was located in the west end of the basement. There was a bar/restaurant on the east end. Those theaters were operated by MidAmerica Cinemas and the auditoriums were so tiny and the projection booth so low, that when you stood up, the light from the projectors would cast a shadow on the screen. Pretty bad place to see a movie, altho it certainly did business in the ‘70s. The last time I was there, the basement was closed off, that theater long gone. The three elevators are in the same place (upgraded) and the escalators too. There are still a few first floor retail spaces, mostly vacant, but the Cinemark 14 now occupies the west upper half of the building. The theaters are on the 2nd and 3rd floors, and the projection booths are on the 3rd and 4th floors. When I came back in 2002, I was amazed at the job they had done incorporating some of the original building into the theater. Even the skybridge is still there, but now it is part of the theater, (carpeted), and takes you from the lobby to the 5 large auditoriums which were built on top of the parking garage across the street. You can exit from those theaters into the garage, but you can no longer enter from there. Two of the original escalators (up, down) take you to the 2nd floor where you buy your tickets and then enter, while the other escalators (up, down) are inside the lobby and take you to the 9 other auditoriums on the 3rd floor. The escalators that went from 3 to 4 have been removed. Two of the elevators will take you to the 2nd floor entrance, while the 3rd elevator has been incorporated inside the theater to serve the 3rd floor down to the 2nd and vice versa for purposes of ADA accessibility. (In other words, if you get on at the 1st floor, the elevators will not take you to the 3rd or 4th floor anymore and let you bypass the ticket window on the 2nd!). The 2nd floor lobby has a concession stand and a “VIP” theater which is very small, about 40 seats with a tiny screen, and serves food and drinks. I prefer the 5 theaters across the skybridge, which are large, spacious and comfortable theaters with large screens and excellent sound systems seating 250 to 400. There is an additonal concession stand there. The 9 theaters on the 3rd floor are all fairly small, ranging from 65 to 150 seats. I haven’t been to the theater in several years, but it was a favorite spot back when I used to make frequent trips to Kansas City. Their architect did a great job of repurposing the space, but it is a little strange to see that large building that used to be home to so many businesses, now primarily occupied by one.

This theater will unfortunately be closing permanently on Sunday, May 19th, 2019 to make room for a Nordstroms. It is possible that half of the auditoriums get redone for a smaller, more upscale complex a few years in the future according to this article: