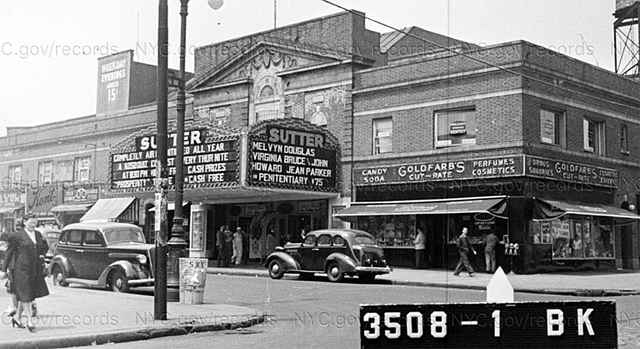 Opened as the Statford Theatre in 1927, it stands under the elevated IRT New Lots Avenue line (3) and was operated by Brandt Theaters. Original plans were proposed in 1926 by architect Harrison G. Wiseman, but these were not carried out. It was equipped with a Wurlitzer theatre organ.

Later operated by Fox Theatres, it was renamed Sutter Theatre. It reopened for a brief time from 1974 as Tony’s Movie House, showing action and kung-fu fare.

The address on the top of this page puts the Sutter in East New York. This should be corrected to Brownsville. I remenmber seeing many Jerry Lewis films here in the early 1960’s. East 98 Street and the elevated IRT Line was considered the border between Brownsville and East Flatbush even though Brooklyn postal zone #12 (zip 11212) extends to Remsen Avenue. My family members lived in this area on Winthrop St, East 93 St and on Tapscott St. We shopped at the small neighborhood stores on Rutland Road and at Henry’s Department Store on Winthrop and East 94th. My grandfather lived in the Hebrew Home on Howard Av. I remember going to visit him and then going to a movie at the Ambassador on Saratoga Av. I also went to the Carroll and the Rugby. The neighborhood at that time was all Jewish.

To give you an idea what it was like being an usher at the Sutter Theatre in 1941, we were paid .25 cents an hour,the owners, Brandt Corp. had private detectives writing detailed reports on our effectiveness. I worked all night long repairing the seats, we cleaned the rest rooms and were not permitted to take a peek at the screen. We did however have a nice red uniform that attracted the girls. Our dressing room was located beneath the stage. The good part was that we were switched to the Flatbush Theatre on occasion (also owned by Brandt) and got to see the top line vaudeville stars and big bands.

I just listed another theater, Brandt’s Stratford on Sutter Avenue between E.98th Street and E. 99th Street in Brownsville. After listing, I ran Google Earth search and realized E.99th would be Ralph Avenue. That would make the 1927 Stratford the same theater as the later Sutter. Photo I saw had original entrance on Sutter Avenue, one store off corner of Ralph. Google Sat. image shows theater building still there.

Perhaps the listing of Stratford should be combined with Sutter?

I patronized the Sutter theater during the late 40s, early 50s. The Saturday matinee was 12Â¢ and they showed 2 feature films and several cartoons and serials. I was a student at Winthrop JHS (PS 232) at the time, and the Sutter theater was, as I recall, a short walk from the school, and an even shorter walk to the Sutter Ave – Rutland Rd station of the IRT New Lots line. Everything seemed like a ‘short’ walk then because we were young and none of us had a car, so it was shanks mare everywhere. Although I’ve been back to New York several times since my departure in 1960, I have never been back to that neighborhood. However, I have heard that the character of the area has changed completely and not for the better.

According to an article in the New York Times of March 1, 1974, Tony’s Theater as well as the Kameo and Carroll Theaters were being operated at this time by Arthur Dickers and Charles Phillips. They were being extorted to allow free admission to youth gang members at Tony’s and the Carroll at 381 Utica Avenue. Such was part of the cost of doing business.

Does anyone have an idea about how to find what was playing at the Sutter on June 29, 1948. I’ve tried the NY Times, Daily News and Brooklyn Eagle for that date but none lists the Sutter.

Interestingly, it looks much better today as a church:

My father took me to most of the theaters in Brownsville that he went to while growing up. I think we went to this theater once or twice and while I have no clear memories of the inside of the theater itself, I remember we saw “The Longest Day,” when it finally made it to the nabes after its long reserve-seat run on Broadway. Since, (with the exception of the Bond films,) this is my all-time favorite film, for that reason alone the Sutter is remembered by me.

1700 seats! We need someone to get inside with a camera and let’s see how it looks today.

Picture of the Sutter added to CT Gallery.