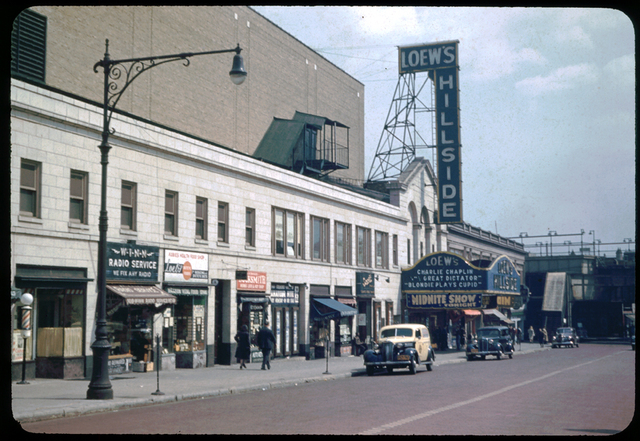 Located in the Jamaica section of Queens. This large Loew’s theatre stood at the western end of the multi-theatre strip, which included the Savoy Theatre, the Alden Theatre and the Valencia Theatre, among others. The Loew’s Hillside Theatre was opened by 1927.

In December 1965 it closed as a movie theatre and went over to burlesque, known as the Hillside Theatre. It was closed in 1972. With an addition built onto the front of the building and windows cut through the theatre walls, it now serves as office space.

Regarding saps' comment above, does anyone else recall the Hillside being a burlesque theater? I surely don’t!

I remember going to a burlesque show at the Hillside Theatre in the early sixties for a bachelor party thing,the comics were funny, so were the women (older). Also, I L O V E D the Nedick’s on the corner and my first fancy restaurant meal was at McGuinesses – I remember my mother ordered lobster (what the hell was lobster?) My First Communion suit was bought at Robert Hall’s across the street from the Hillside. Later on I would go to the DMV for my drivers license. And of course the Court House for Jury duty.

It looks like the part of the building with retail stores was demolished or extensively renovated to accommodate a 4-story addition for commercial office spaces (totally hiding that behind the cheap new façade is an old building). Does anyone know if the auditorium is still intact? Or was that destroyed with the transformation of the street front part of the building …

I spent years at this theatre starting in 1955 through early 1960s. I lived two blocks south of the LIRR station in Jamaica NY and my mother was a cashier at the Hillside for many years. I worked as a cashier through 1962 (just as the theatre was going out of business). It was a magnificent place with marble floors, staircases and crystal chandeliers hanging from a mezzanine ceiling that was 50 feet off the ground floor. I wish I had taken pictures, but …

In the late 50s there were many stage shows and because this theatre was located right under the Queens BMT Sutphin Blvd stop, it was very convenient. It was called the “Hillside” but Hillside Avenue was at least ½ mile away (and that’s where the IND E and F trains stopped. The theatre was also a short walk from the LIRR station on Archer Avenue.

Two popular shows were JEWEL BOX REVIEW and the MURRAY- the-K ROCK CONCERTS. Both ran in the late 50s, but I can’t give you specific dates. JEWEL BOX REVIEW was a transsexual show which I watched from the candy counter while I waited for my mother to get off work. This adult show featured male performers who were awesome, talented and mostly very feminine. It ran for a couple of weeks at least two years in a row.

Murray the K was a local disc jockey and hosted the two annual ROCK CONCERTS at the Hillside Theatre which included most of the popular mo-town singers and groups of the 50s. I was in junior high in the 50s but I remember Little Anthony and the Imperials and the Echoes who were my favorites back then. I stayed backstage for these performances and loved every minute.

I would love to hear comments from anyone else who spent time at the theatre. Her sister theatre, the VALENCIA, was even more majestic – a mile down Jamaica Avenue around 160th Street. This was all before the elevated trains were demolished. Many, many years ago. Great memories. I

Great area! I remember the Robert Hall clothing store. As a kid it took forever to walk past it. Also the sports store, the take-out chinese restaurant, and the Nedicks. My brother and I would go, and for a buck we could pay for admission with enough left over for a box of ice cream bon bons. I saw “The Greatest Show on Earth” there and had dreams for weeks about the train hitting one of the circus cars. Also saw “The Wizard of Oz” there and was at first disappointed when it was in black and white, before it turned to color. Also Mondo Cane and one of those Smell-O-Rama films, where they cut into an orange, and had an Indian funeral pyre. In the 50’s there always seemed to be at least one fight after the rock and roll show. Amazing times!

This neighborhood is very different now.

Beverly Schecter, a mother of three beautiful teenage children, was the only woman burlesque producer in the United States. Aside from being a mother and producer, she was in show business public relations for more than 30 years and had the know-how needed for this new venture at the old movie theater.

She arranged special promotional prices for groups for fundraising. Whether dude or prude, in the pink or with a mink, the live-in-the-flesh entertainment was very well received. The theater was filled mainly with couples, who outnumbered the singles. Schecter was flooded with requests from all over the world but she wanted to keep the image of what burlesque was in the days of Minsky. There was a new show each week with well-known favorites like Virginia Bell, Georgia Southern and Linda Lavell. Schecter also brought back old-time favorite vaudeville stars like Red Buttons and Henny Youngman. Merchants in the surrounding area increased their business due to the re-opening of the theater.

Sadly the area became dangerous with drug dealers a few years later, and the crowds stayed away. The theater closed sometime in 1972, forever ending an era. Today it contains commercial office space.

It should be noted that the Hillside was no longer operated by Loew’s by that time, and that the Loew’s name had been removed from signage and advertising/publicity. Yet Marzlock starts his article by incorrectly stating that Loew’s Hillside went burlesque in December 1965.