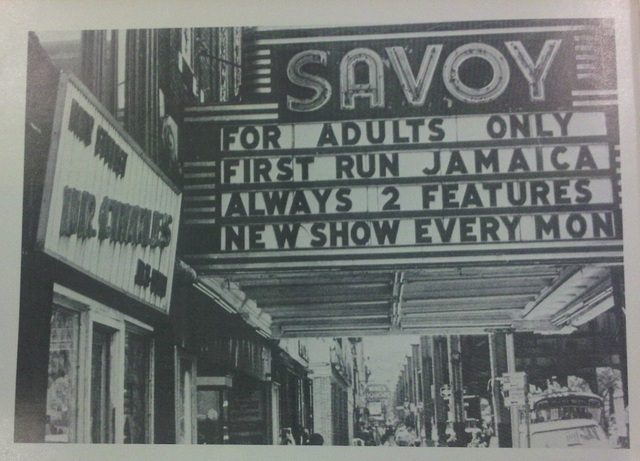 Located in the Jamaica section of Queens. The Rialto Theatre was opened December 1, 1920. It reopened as the Savoy Theatre on December 28, 1929. One of my favorite downtown Jamaica theatres in the days when they ran triple features which changed three and four times a week during the 1950’s. There was always a western on the bill, followed invariably by a “Bowery Boys” feature and a Realart, Columbia or RKO reissued main feature. By 1957 it was operated by Liggett-Florin Booking Service.

On many visits to the theatre, I recall seeing a framed sign mounted in the lobby indicating something to the effect that the Savoy Theatre was the first theatre to show “talkies” on Long Island. I know this contradicts with the claim elsewhere on this site that the Arion Theatre in Middle Village was the first. Perhaps someone in the know could clarify this point.

Check out those titles
View link

I was looking at the Century Brooklyn Rialto and found reference this “second” one built by Schwartz. Kind of unusual to have two theatres with the same name in a small local chain.

The former Rialto opened as the Savoy on December 28, 1929 under the ownership of local businessmen, the Alterman Brothers. In addition to a complete renovation there was the installation of a Western Electric sound system.

The Savoy became the first theatre in Queens to serve as a first run house for Warner Brothers films.

The Rialto opened on December 1, 1920. At a cost of a half million dollars it was hailed as: “one of the largest photoplay houses in New York bearing comparison with any other theatres on Broadway”. The opening film was “Something to Think About” with Gloria Swanson and Elliot Dexter. The house also boasted a twenty five piece orchestra and a gigantic pipe organ (mentioned in a much earlier comment on CT). There was a special exhibition agreement with Famous Players-Lasky and Paramount.

Although other references to this theatre show it as being built by Al Schwartz after the success of his Rialto in Brooklyn, it was purported to be a local project using a local architect and financing. It was to be operated by the Long Island Motion Picture Company, two of whose officers were the Alterman Brothers who are listed as the new owners when the theatre reopened as the Savoy in 1929.

Can’t believe they were taking phone reservations in 1920! Seating capacity was greater as the Rialto than the Savoy. Somewhat surprising figuring the former also accommodated a 25 piece orchestra and a “gigantic pipe organ”.

The commentary says the, at that time, Rialto, was the first theatre to be wired for sound in Queens. There was also a claim that the Arion in Middle Village was. Comments on the Arion site would lead one to believe that neither had that distinction. Inasmuch as “The Jazz Singer” opened at Fox’s Jamaica (later called the Cort and Carlton), it would seem that the Rialto (Savoy) was not even the first in Jamaica. When the renovated, renamed theatre opened in December, 1929 it boasted a new Western Electric sound system. Would that have been done if one had been put in place only a short time before when talkies first came out?

Slight error in the robboehm comment of 3/8/14. Fox’s Jamaica Theatre never had a name change. It was the Jamaica Theatre for its entire existence. The Cort / Carlton Theatre was located some 20 blocks east on Jamaica Avenue.

Great photos. Who knew what a grand playhouse it started out as.