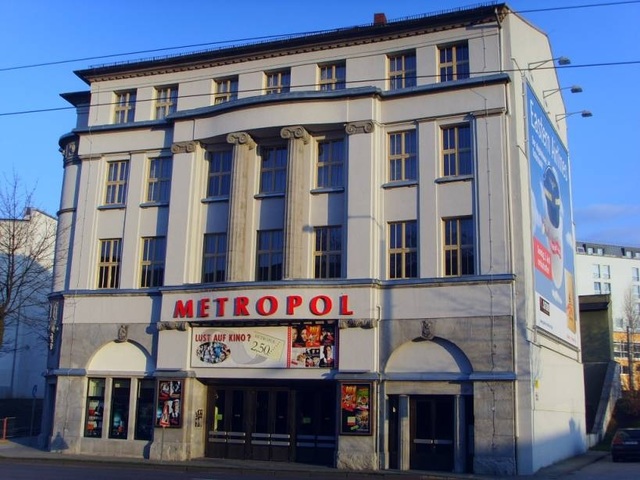 Located in the Saxony region of southeast Germany in the city of Chemnitz. The Metropol Theater was opened as a vaudeville theatre on 23rd September 1912 with a seating capacity of 600. There was an area provided for dancing in front of the stage, and also in the balcony.

In the late-1920’s it was equipped to screen ‘talkies’, and became a full-time cinema, operating as the Filmpalast-Metropol. In February 1945, the cinema suffered severe damage during a raid by Royal Air Force bombers. It was closed for 18 months while repairs were carried out, and re-opened on 22nd April 1947. The height of the building was reduced by one floor.

It was renovated in the 1980’s and after the reunification of Germany, was taken over by the Ufa chain, who operated the Metropol Kino until it closed on 30th April 1998.

It was re-opened on 3rd September 1998, operating as a budget cinema by the Kino!Kino!Entertainment chain, with seating provided for 371. KKE operated the cinema until 2005. It was immediately purchased by an independent operator and was refurbished. In 2012, it has been equipped with a Kinoton DCP 30 SX II D-Cinema digital projector, and has 3D capability. The auditorium has been draped, and retains screen curtains.

If you go to the official website under Official Websites) for this theatre, and then go to the English version, there is a gallery tab that has several pictures of the theater’s exterior over the years, and there some night views on this webpage.